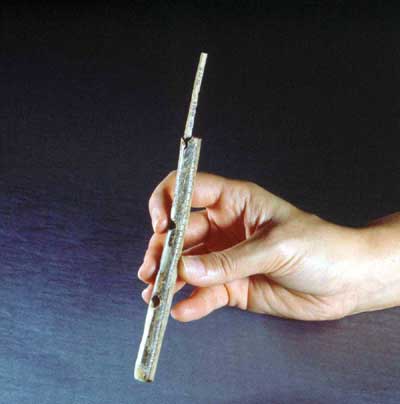 What was life like in Europe, during the Ice Age of the Upper Palaeolithic? Now, some tantalising finds bring that erstwhile era somewhat closer. And it seems that life was tuneful.
Recent excavations by the University of Tübingen in Germany’s Swabian Jura have produced what appear to be the world’s oldest musical instruments.
The instruments – three flutes – were found at the Geißenklösterle Cave near the town of Blaubeuren. Of these, a flute carved from mammoth ivory (pictured) is thought to be the oldest, at well over 30,000 years old.
The highly fragmented ivory flute lay at the base of the upper Aurignacian deposits at the site. Its reconstruction was an act of conservation wizardry: 31 pieces of carved mammoth ivory have been assembled to form a flute with at least three finger-holes and a length of 18.7 cm. Two other bird bone flutes were uncovered in the same deposit.
The Aurignacian is the first cultural group of the Upper Paleolithic and dates to the period in which both the last Neanderthals and the first modern humans occupied Europe. These deposits at Geißenklösterle have produced 16 radiocarbon dates ranging between 30,000 and 36,000 years ago. Another dating method, thermoluminescence, has given two dates of around 37,000 years ago.
The three flutes from Geißenklösterle are considerably older than any other musical instruments known and demonstrate that music played a role in the lives of our Ice Age ancestors.
The technology used to carve a flute from solid mammoth ivory goes well beyond that used to produce a flute from hollow bird bones. The ivory flute was carefully carved in separate halves, which were subsequently bound and glued together along a perfectly prepared, air-tight seam. The Aurignacian inhabitants of the Swabian Jura were adept artisans, who produced many of the earliest known examples of figurative art, including small ivory figurines found at Geißenklösterle and three other sites in the region. Yet Geißenklösterle is the only site to produce musical instruments.
Is it just a matter of preservational luck or was the Swabian Jura a key area of cultural innovation at the start of the Upper Paleolithic? Whatever the case, these finds are set to play an important role in discussions about the origins and dissemination of human cultural activity. They also indicate that no later than 35,000 years ago the inhabitants of the European Ice Age were fairly culturally sophisticated and thus likely to have been behaviourally and cerebrally modern.
Even if we cannot know what tunes these Palaeolithic people played, experiments by Friedrich Seeberger, a leading researcher of prehistoric music, conclusively demonstrate that varied and aesthetically pleasing music can be produced from these musical instruments.
The three flutes from Geißenklösterle are currently on show in a special exhibit on Ice Age music in the Württembergisches Landesmuseum in Stuttgart.