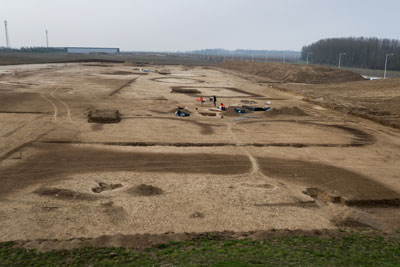 Archaeological work ahead of the construction of warehouses at Buchères, near Troyes, France, has uncovered the graves of around 30 Gaulish warriors and women, dating back more than 2,000 years.

Excavated by the Institut National de Recherches Archeologiques Préventives (INRAP), the individuals are thought to have belonged to a small La Tène period community who lived in the 4th-3rd centuries BC.

Around half the graves, some of which are surrounded by small, square enclosures, have been investigated so far. Of these, five men were buried with swords and spears, while two graves also contained the remains of shields, represented only by their metal rims and central supports.

The women were buried wearing elaborate bronze jewellery, including decorated torques and coiled serpentine bracelets. Both sexes had large iron and bronze brooches, some decorated with coral, which have been stylistically dated to c.325-260 BC.

‘This funerary complex is exceptional in more ways than one,’ said lead archaeologist Cécile Paresys. ‘Despite previous rescue archaeology undertaken over very large open areas in the Seine Valley, particularly around Troyes, the discovery of funerary monuments from this period is very rare.’

She added: ‘This site also differs significantly from those found a little further north, in the Marne, in that there is no sign of pottery vessels or food accompanying the dead.’

So far, no children have been identified at the Iron Age necropolis, and archaeologists have found no trace of any nearby settlement from this period. The presence of earlier funerary monuments could provide a clue as to why this site was selected for the burials, however.

In the immediate vicinity of the cemetery, archaeologists have identified a line of 15 Bronze Age enclosures, the remains of now-vanished burial mounds. Although the barrows have been totally levelled and the graves they contained lost, they would have been prominent features of the prehistoric landscape. ‘These would have been visible for kilometres around,’ said Cécile.

INRAP has been investigating the 260ha (640 acre) site since 2004, with 40 excavations to-date. While the La Tène period burials were revealed during the most recent phase of digging, previous work has found evidence of human activity dating back to the Neolithic period – including a 5,500-year-old mass grave, containing 40 individuals buried in three layers in a rectangular pit – as well as a stretch of the Roman road that ran between Reims and Dijon.