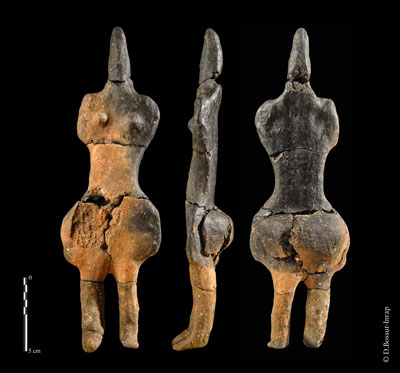 The Somme region of Picardie is already famous in archaeological circles for the first hand axe to be found in a securely stratified context with the bones of extinct mammals. This find prompted the realisation in European antiquarian circles that humans were far older than timeframes based on Biblical events. Now the same region has produced a splendid example of a Neolithic fertility figurine, dubbed ‘the Villers-Carbonnel lady’ after the find site on the banks of the River Somme.

Dating from sometime between 4300 and 3600 BC, the 20cm figure has exaggerated buttocks, wide hips and narrow waist, prominent breasts, but only schematic legs and no arms. She resembles figures found in quantity in the Aegean and Mediterranean, but is a rare find this far north. Similar Neolithic female representations have been found at Noyen-sur-Seine in Seine-et-Marne, Maisy in Aisne, Jonquière and Catenoy in Oise, and Bercy in Paris, but they are by no means common.

This latest statuette was found in waste material from a Neolithic kiln, and had been thrown away because she broke into several pieces during the firing process.

Françoise Bostyn, the archaeologist in charge of the dig, said that further examples might well be found, though probably as fragments rather than the whole figure.

The kiln was found during excavations by the French state archaeology agency, INRAP, along the line of the new Seine-Nord Europe canal, an inland waterway 96km in length and 50m wide, designed to connect the Seine and Scheldt rivers.