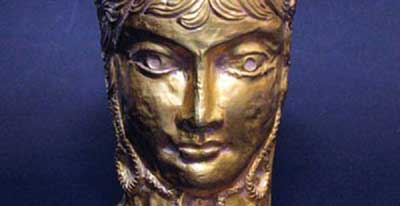 French archaeological divers have found a marble bust on the bed of the River Rhône in Arles. They believe the lifelike head, showing a balding man in his fifties, dates from 46 BC, and depicts Julius Caesar, founder of the Roman colony at Arles, two years before his assassination.

Luc Long, the archaeologist who found the bust, said it was typical of the more realistic style of the republican period, before the conventional representations of a divine Caesar. ‘He has a long neck, wrinkles showing his age, the prominent Adam’s apple, the high and wide forehead and marked baldness,’ he said. Michel L’Hour, director of the underwater architecture institute at Marseilles, said: ‘It is very realistic. Not at all prettified. Caesar’s features are hard and ageing. That makes it remarkable. It is much more human than the stereotypical statues which show him with laurel crowns. It is the oldest bust we have of Caesar and it was doubtless sculpted to honour him as the patron and founder of the town of Arles.’

Not everyone believes the bust does depict Caesar, however. Paul Zanker, former head of the Deutsches Archäologisches Institut in Rome and author of The Power of Images in the Age of Augustus, told the Sued Deutsche newspaper that he does not know who the bust depicts but that he is certain it is not Caesar. The bust will go on display in Arles museum in September 2009, along with 100 other objects excavated from the river, including a life-sized statue of Neptune and a bronze satyr.

In Britain, meanwhile, an exceptionally rare and beautiful gold cup, beaten out of a single sheet of gold and made somewhere in the ancient Iranian Achaemenid empire before 330 BC, has emerged from a shoebox underneath the bed of John Webber, who inherited it from his grandfather, a scrap metal dealer working in the Taunton area before World War II.

The cup is decorated with two female faces looking in opposite directions, their foreheads decorated with a snake motif. Mystery surrounds its origins, but John Webber said of his grandfather ‘he had a very good eye, and was always picking up all sorts everywhere he went. Half the people in Taunton used to call into him on their way home and sell him stuff if they’d had a bad day at the races’.

Webber thought the cup was simply a modern reproduction in brass until British Museum scientists suggested that it should be tested: the results showed that the method of manufacture and the composition of the gold are consistent with Achaemenid gold and goldsmithing. Archaeologist Jeannine Davis-Kimball, an expert on the ancient peoples of Central Asia, commented: ‘The cup is just stunning. The heraldic snakes relate to the iconography found in eastern Iran, especially during the early Elamite period’.