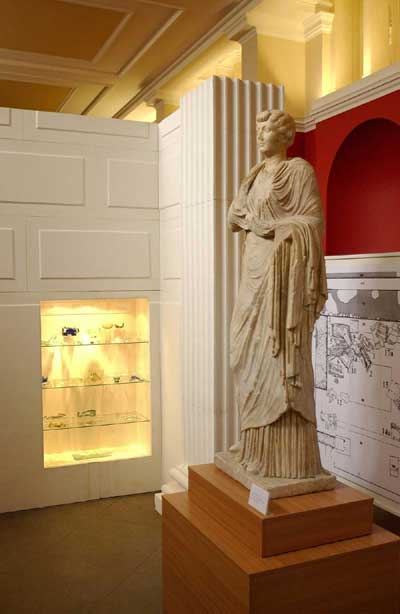 During the mid 1990s, Croatian archaeologists uncovered a number of headless marble male and female torsos. These they found in a wealthy Roman shrine following re-excavations of the area around the Roman Forum of Narona, the present-day village of Vid; the shrine had been deliberately destroyed when the area became Christian. One of the headless figures was that of Livia, the wife of Emperor Augustus.
But the story does not end there: back in 1878, while in the Balkans as a Manchester Guardian correspondent, Sir Arthur Evans acquired the head of Livia for Oxford’s Ashmolean Museum. Livia’s head, it turns out, belongs to the recently discovered torso.
Now, after 1700 years, Livia’s head and body have been reunited. She forms the centrepiece of an ongoing exhibition at the Ashmolean (finishing on October 17th). The exhibition, entitled ‘The Rise and Fall of an Imperial Shrine: Roman Sculpture from the Augusteum at Narona’, also recreates the other lost splendours of the shrine, as depicted below.
And after the exhibition, Livia’s body will return to Croatia, complete with her head on extended loan. There, the full Livia will be kept at the Archaeological Museum in Split.
Dr Marin, Director of the Archaeological Museum at Split, and leader of the excavations in Croatia, says: ‘It is marvellous to be able to reunite Livia in Oxford. We are incredibly grateful to the trustees of the Ashmolean for allowing this dream to come true. This is a true partnership between our two countries.’