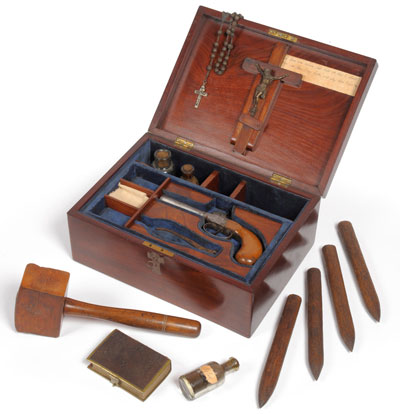 There are two types of vampire in this world: the fictional variety – handsome, debonair, usually wears a silk-lined cloak, has a slightly Slavic accent, perhaps a small moustache, stars in Hollywood and Hammer Films in the 1950s, and has had new lease of life recently as a result of the Buffy and Twilight TV series aimed at the Harry Potter generation of teenagers. Then there is the real thing.

The Real Thing? No, of course not. They don’t exist – but plenty of people do believe in them and that, for an archaeologist with an interest in anthropology and folklore, makes them a fascinating subject to study. Real vampires are not at all handsome or sexy – you really wouldn’t want them in the house, trailing blood and gore, and smelling putrid. That is why, in the past, strong measures were taken to pin them down in their graves and stop them wandering around in search of fresh young virginal blood.

Hence when the media recently reported the discovery of ‘vampire’ graves in Bulgaria, the clue to their identity was that they had been pinned down through their chests with iron rods. Announcing the discovery, Bozhidar Dimitrov, Head of the National History Museum in Sofia, said that ‘in some parts of Bulgaria, corpses regularly had iron rods hammered through their hearts before being buried, even until the beginning of the last century, to stop the dead from turning into vampires’. He went on to explain that ‘the fear was that those who did evil in their lifetimes would return after death to feast on the blood of the living.’ According to Dimitrov, these particular ‘vampires’ were possibly aristocrats or clerics, judging by the fact that their graves were found in the apse of the church of the monastery of Saint Nicholas Wonderworker, in Sozopol.

Top tip: use something sharp

Folklore studies of the European vampire phenomenon seem to agree that such beliefs originate with pre-Christian or recently Christianised ethnic groups in the Medieval Balkans and Eastern Europe, which is where most vampire-type burials have been found. These suggest that the best way to stop the revenant in his tracks (and all the burials of this type found so far have been male) is to bury something sharp in his grave: sickles, thorns and needles, the coulter or cutting edge of a plough, even a lemon have been found in ‘vampire’ graves; but most often they are kept in check by means of a sharpened stake made of hawthorn or oak.

The idea, it appears, was not so much to pin the corpse down, but rather to stop the bloating that was thought to enable the corpse to bust through the soil covering the grave so as to rise and torment the living.

Other measures recorded by anthropologists and folklorists to prevent such a return include complete incarceration of the body in a brick-lined grave, shooting or drowning of the corpse as part of the funeral rite, and/or shooting a bullet through the coffin just to make absolutely certain that the deceased really is dead.

Any budding detective writer or lover of detective fiction reading this will have perhaps have thought ‘aha… that’s a good way of murdering someone and getting away with it’. Yes, if you live in those parts of the world where such beliefs still hold sway, but before you rush to your agent with the plot of your next best-selling novel, you need to know that someone else got there first. Exactly this scenario features in the latest novel by Fred Vargas – Un lieu incertain (An Uncertain Place) (2011) – and it is giving nothing away by saying that the plot revolves around the celebrated case of Peter Plogojowitz, one of the earliest documented cases of a supposed revenant, who was believed to have killed nine of his fellow villagers in 1725 and whose case was reported in the Viennese newspapers of the day.

The reason for mentioning Fred in this column is that she is an archaeologist as well as a novelist: her fans cannot get enough of her inventive books, which always top the best-seller list in her native France in the weeks following their publication. Frederique Audouin-Rouzeau (her real name) says she took up writing as a way of relaxing from her job as an academic, working for the Institut Pasteur, where she specialises in the archaeology of the plagues that devastated Europe time and again in the Middle Ages, and that form the theme of her novel Have Mercy on Us All (2001) and of her academic monograph Les Chemins de la Peste (Routes of the Plague) (2003).

Fred’s books are not about archaeology per se, but her characters are all familiar to anyone who lives and works among archaeologists. If you are looking for a good read, try Debout les morts (The Three Evangelists) (2006), whose central characters are a Medieval historian (Marc Vandoosler), a battlefield historian (Lucien Devernois), and a prehistorian (Matthias Delamarre) – three impoverished academics living in a ramshackle house, who pool their arcane knowledge to solve the crimes at the heart of this entertaining and prize-winning novel.