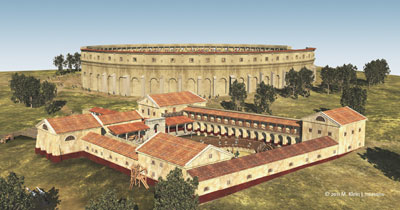 The former Roman town of Carnuntum, today an Archaeological park on the Danube 24 miles (38km) east of Vienna, is already known for its well-preserved amphitheatre, but archaeologists have now also discovered the first gladiator training school ever found outside Italy. The find was made using state-of- the-art, ground-penetrating radar equipment, so sensitive that, according to frank Humer, an archaeologist with Vienna’s Ludwig-Boltzmann institute, ‘the wooden post that gladiators traditionally used as their mock opponent during training is still visible in the middle of the school’s arena.’
At the centre of the so-far unexcavated school was a circular heated training hall, equipped with wooden benches. Also identified are a bath house, administrative offices, and small cell-like rooms for the gladiators themselves. The school has been dated to the middle of the 1st century AD, when the settlement became the headquarters of Rome’s legio XV Apollinaris, and had a comparatively large military population.