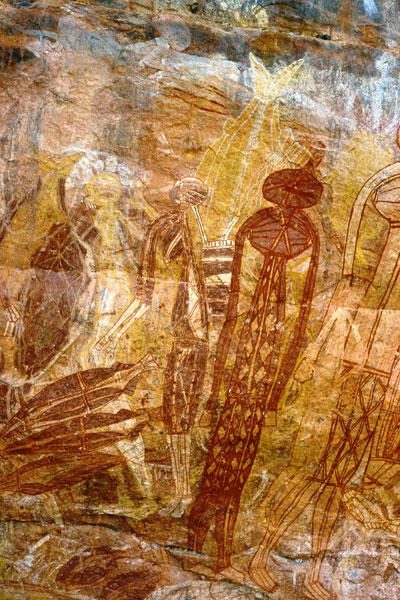 Half of Australia’s rock art could disappear in the next 50 years, according to the country’s archaeologists. They have mounted  a campaign to raise awareness of the outstanding quality of the nation’s indigenous rock art, which is now under threat.

Rock art is exposed to many  natural hazards, such as wind and rain erosion, bushfires, and animals rubbing themselves against the rock face; but other threats include the deliberate bulldozing of rock art that stands in the way of housing, mining or industrial development, vandalism, graffiti, acid rain, and even theft – particularly fine examples have simply been carved out of the rock by art thieves.

Paul Taçon, Professor of Anthropology and Archaeology at Griffith University  in Queensland, says that part of the problem is simple ignorance on the part of Australians about the quality and antiquity of the art. He hopes raising awareness will instil in Australians the same sense of national pride that the French feel for their prehistoric cave art: he argues that South Africa offers another model, where ‘they too had a European colonial system, but everyone in South Africa values their rock-art heritage’.

Taçon and his colleagues say that rock-art research, conservation, and management is currently carried out on an ad hoc basis and needs organising, because important sites are being lost through lack of knowledge. Those that are most at risk need to be identified, and campaigners hope to raise A$6m
to create a national rock-art register. This sum is no more, they say, than was spent by the Art Gallery of New South Wales to buy one painting by Sir Sydney Nolan in 2010; in return, many of the more than 100,000 rock-art sites can be documented and scanned using 3D digital imaging, and hundreds of thousands of works of art could be saved.

Stratified and dated finds of ochre, one of the pigments used in rock art, suggest that Aboriginal people began producing rock art shortly after arriving in the continent some 50,000 years ago. So  far, the oldest dated examples found were made around 15,000 years ago, but rock art continued to be created until about 20 years ago. It depicts long-extinct animals, and also offers striking illustrations of sailing ships and aeroplanes dating from the ‘contact period’, after Europeans first began to arrive. The powerful images document the ways in which Aboriginal Australians have lived, hunted, celebrated, and worshipped over many millennia.

Professor Taçon laments the fact that many Aboriginal communities struggle to get funding to look after rock-art sites, and that generations of Australians have failed to appreciate the richness of Aboriginal rock art. ‘We want to raise awareness that these are important, special places,’ he says, ‘part of the national identity.’ More than that, argues Alistair Paterson, Archaeology Professor at the University of Western Australia: ‘This art is globally significant, because modern humans arrived in Australia earlier than they got to Europe, and this art tells the incredible story of how they dealt with the landscape they found.’