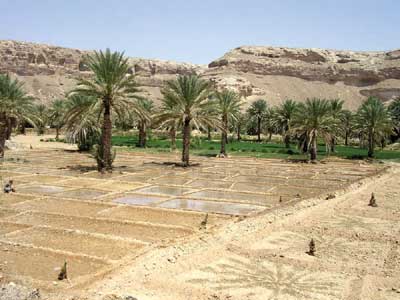 Evidence of ancient transitions from hunting and herding to irrigation agriculture some 5,200 years ago has been found by a team of archaeologists in the remote highlands of Yemen.
Novel survey techniques were employed by the Roots of Agriculture in Southern Arabia (RASA) project team, whose members recorded 174 ancient irrigation structures and used interviews with contemporary camel and goat herders and irrigation farmers to clarify the social importance of ancient water control.
In a paper published in the journal Current Anthropology (June 2008), Michael Harrower, of the Department of Anthropology, University of Toronto, says that early farmers in the rugged Wadi Sana terrain faced unique environmental challenges, to which they responded by developing an expert knowledge of hydrology and by targeting small watersheds and landforms, where they could capture the water runoff from summer monsoons.
Such was the importance of water that a complex social landscape developed involving property rights, and the controlling and sharing of water, with stone burial cairns serving as important territorial markers. Michael Harrower believes that contemporary land and water rights in Yemen, including principles enshrined in Islamic law, developed in conjunction with water management as tribal principles of water equity became intertwined with changing ideologies and culture.
‘Yemen’, he says, ‘highlights the joint importance of environmental conditions and social relations, hydrology and territoriality in the transition from foraging to agriculture that, in Yemen, later gave rise to powerful ancient cities and states with advanced irrigation technologies that transformed deserts into lush, bountiful oases.’ •