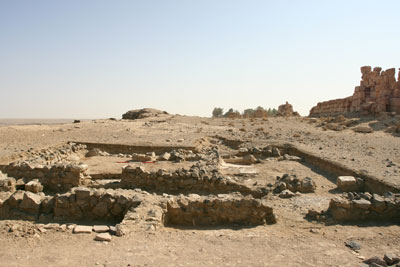 Archaeologists in Syria have been forced to pull out of the country because of civil unrest, with protesters opposing the government of President Bashar al-Assad. International teams were recording sites threatened by the Halabiyeh hydropower scheme. Now they fear that many of these important and little-explored sites will be lost to flood waters, if the Halabiyeh dam is completed on schedule and no more time is allowed for excavation.

Opposition to the construction of the dam from cultural and environmental experts has been ignored by the Syrian authorities so far, but permission had been given to record some of the many Bronze Age, Roman, and Byzantine sites lining the banks of the River Euphrates which will be drowned.

Dr Emma Loosley, from the University of Manchester, had been working under licence from Syria’s Department of Antiquities at Zalabiyeh. This Byzantine-era fortress overlooking the narrowest point in the Euphrates once controlled a vital trading route. The whole area, she said, ‘contains evidence of continuous human settlement through many civilisations including the Assyrian, Roman, Arab – it is an astonishing area to work in and one of the most important in the world.’

Further upstream, Spanish archaeologists had been working on a Bronze Age site, while French teams had been exploring ways to protect 3rd-century ruins on a popular tourist site of which a third will be lost when the dam causes water levels to rise by 14 metres.