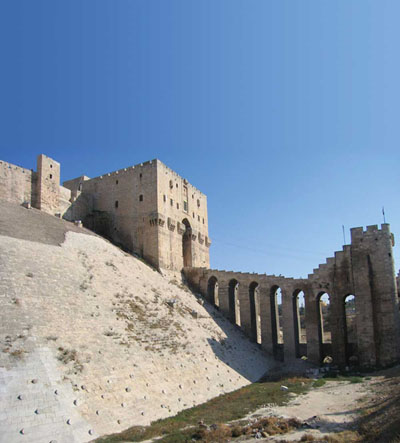 The Aga Khan, Prince Karim al-Hussaini, has pledged to use some of his immense wealth to pay for the restoration of Islamic sites in Syria. The Aga Khan, who last year celebrated 50 years as spiritual leader of the world’s 15 million Shia Ismaili Muslims, said his aim was to educate the world in Islam’s achievements: ‘We don’t do enough to illustrate to the peoples of our world the greatness of Islamic civilizations,’ he said, adding that ‘modernity should not only be seen in the terminology of the West, but in the intelligent use of our past.’ The Aga Khan planned in his youth to train as an architect, but graduated instead from Harvard University with a degree in Islamic history.
Conservation work is already being carried out by the Aga Khan Trust for Culture, in close collaboration with Syria’s antiquities department, at the Aleppo World Heritage Site, with its Crusader era citadel, the Madrasa Halawiye (built by order of the mother of Constantine the Great in 1124 on the site of the Cathedral of St Helena), and numerous beautiful medieval mosques. •