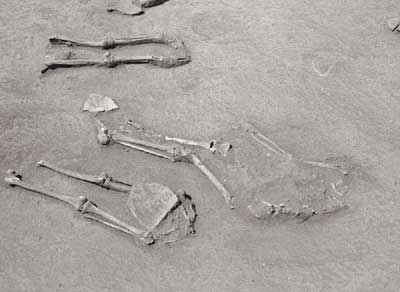 Dramatic end for Syrian acrobat: Archaeologists in Syria have found the remains of an acrobat whose life ended in mysterious circumstances around 2300 BC. The acrobat’s headless remains were found along with donkey bones and the remains of two other decapitated human bodies within the walls of a monumental building at Tell Brak (ancient Nagar), in what is now north-eastern Syria. Writing in Antiquity Volume 82 Number 316 for June 2008, Joan Oates, Theya Molleson and Arkadiusz Sołtysiak say that the remains looked at first like ‘random killing and disposal’, because the partially dismembered skeletons were left unburied, and simply covered with building debris. But the location of the bodies in the reception and main office portion of a building that served as a temple dedicated to Sakkan/Samagan, god of animals of the steppe, struck them as ‘unusual, indeed strange’. When one of the humans turned out to have bone lesions consistent with the injuries sustained by circus acrobats and ballet dancers, the excavators decided that the apparent crime scene was, in fact, ritual in character, and that the remains represented ‘the deliberate sacrifice of valued creatures’. The excavators propose that the acrobat was a member of a ‘mysterious group of people from Brak-Nagar, known in the texts as húb or húb.ki, a term that carries the sense of ‘jumping about’ and sometimes translated as ‘acrobats’ or ‘jugglers’, and sometimes as ‘horsemen’. At first, the donkey bones were explained as draft animals, until it was realised that the building had been associated in some way with the breeding or trading of hybrid kúnga equids (a cross between the domesticated donkey and the Asian wild ass, or onager) which preceded the appearance of the horse in ancient Mesopotamia. Cuneiform documents recording the receipt or dispatch of these animals were found in courtyard 43 of the same building. Texts and seals attest to the extravagant sums paid for this type of mule, regarded in the 3rd millennium BC as the only animal deemed fit ‘to draw the chariots of gods and kings’. The excavators conclude that ritual, rather than revenge or murder, was the most likely explanation for finds, especially since the bodies had been covered with mud brick debris that had been neatly levelled off, and valuable ‘offerings’ placed into the top of the fill, including some very fine silver jewellery. ‘Some form of environmental catastrophe remains a possible explanation,’ say the excavators as the reason for this ritual closure and temporary abandonment of the building. •