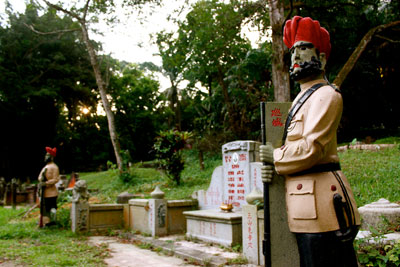 Since independence from Malaysia in 1965, the Republic of Singapore has undergone a radical metamorphosis, emerging from kampongs and swamps to a glittering 21st-century city-state. It is one of the world’s richest countries, with over five million people packed into the small island, alongside skyscrapers, neon shopping malls, and luxury condominiums.

Over the years numerous heritage locations have been swallowed by the rapid urbanisation of Singapore. The next imminent casualty is Bukit Brown Cemetery, the largest Chinese cemetery outside China and home to over 100,000 graves. The Singaporean government intends to build an eight-lane highway through the heart of the site. Construction of the 2km-long road starts next year, heralding a wave of building that will eventually include a new train station and housing for 50,000 people.

A firestorm of protest has erupted from heritage activists and online communities, with the media dubbing the burgeoning crisis ‘the Battle for Bukit Brown’. As the last great historic cemetery in Singapore and final resting place of many pioneering immigrants who shaped the nation, the site is loaded with cultural significance. Named after a British merchant who arrived in the early 19th century, Bukit Brown was established as a public Chinese burial ground in 1922, and contains Qing dynasty tombs dating back to the 1830s.

Bukit Brown supports a rich ecosystem. Its 233ha of wooded hillocks are home to 25% of the country’s bird population, many species of which are endangered. Recent sightings of the extremely rare Large Flying Fox (Pteropus vampyrus) suggest the sprawling cemetery contains a hidden biodiversity yet to be fully appreciated.

Activist group ‘SOS Bukit Brown’ marked the recent National Day with a clear statement to the developers: ‘Bukit Brown has no equal in Singapore or the world. It is a dishonourable and short-sighted act to destroy Bukit Brown by building a highway through it.’ This view has been echoed by Member of Parliament Ms Irene Ng: ‘We should not rush to demolish what some may treasure as heritage sites – as once demolished, what is lost cannot be recovered’.

The fate of Bukit Brown is not uncommon – since the 1960s, Singapore has relied heavily on reclaiming land from the development of former cemeteries. As far back as 1865, British civil engineer John Turnbull Thomson wrote that ‘roads are recklessly carried right through the bones of the original native settlers, and crowded streets now traverse the sacred places where many of the Singapore primeval worthies are laid in their last homes.’

Scarcity of land is a constant challenge in Singapore, and planners claim the new highway will alleviate traffic congestion, projected to increase by as much as 30% by 2020. Minister of State for National Development, Mr Tan Chuan-Jin, admits that ‘difficult decisions about land use have to be made, and sometimes, the development of places such as Bukit Brown is unavoidable. These decisions are not taken lightly.’ Leading by example is founding father of modern Singapore, former Prime Minister Lee Kuan Yew, who has a grandfather and aunt interred at the cemetery. Defending the government’s heritage track record, Mr Tan also points out: ‘we have conserved more than 7,000 buildings and earmarked our oldest urban areas such as Kampong Glam, Little India, Chinatown, and Boat Quay for conservation. These are the things that many may take for granted as we pass them by.’

Campaigners have strongly refuted claims of land scarcity by pointing out 31 golf courses that dot the country, covering over 1,500ha and amounting to six times the size of Bukit Brown. Groups such as Nature Society (Singapore) have suggested alternative routes for the proposed highway to avoid destroying the historic gravesite. MP Ms Irene Ng argues: ‘space is always a constraint in Singapore. But it does not answer the question of why a road to cater to a group of motorists is given higher priority over what some others may value as a heritage site.’

The protests have led to some concessions being granted. A section of the road has been redesigned as a vehicular bridge, reducing the impact on flora and fauna. While unclaimed historic tombstones will be destroyed, the exhumation of the endangered graves has been delayed until next year, allowing more time for families to remove ancestral remains.

In an effort to balance the needs of both development and preservation, the Ministry for National Development has funded the documentation of the 3,746 graves marked for destruction. Dr Hui Yew-Foong, from the Institute of Southeast Asian Studies, has lead a team recording a wealth of new discoveries, including burials from immigrants hailing from China, Siam, Penang, and the Dutch East Indies. Dr Hui believes: ‘the material culture associated with the graves, such as stone reliefs imported from China and decorative ceramic tiles imported from England, shows how embedded Singapore was in the global economy of the early 20th century.’

Bukit Brown is more than just a collection of statues and tombstones. Campaigners fear that eviscerating the site will destroy one of Singapore’s last great cultural and ecological hotspots. Acting as a rare physical archive of a nation’s past, notes Dr Chua Ai Lin from the Singapore Heritage Society, ‘Bukit Brown is a treasure trove of personal stories that weave an intricate historical network of links between the overseas Chinese and the region.’

The backlash against development in Bukit Brown has triggered an influx of visitors, both young and old, which experts believe signals a turning point in how Singaporeans engage with the nation’s past. Dr Chua thinks: ‘it signals an era in which Singaporeans guard more jealously the sites, spaces and artefacts of their forefathers. The unrelenting waves of globalisation have made the search for authenticity more important, and this is something that has energised local heritage activism.’ As the construction date looms, the fight to preserve this unique historical and ecological haven is certain to intensify, as Singapore faces the irreparable loss of Bukit Brown for present and future generations.