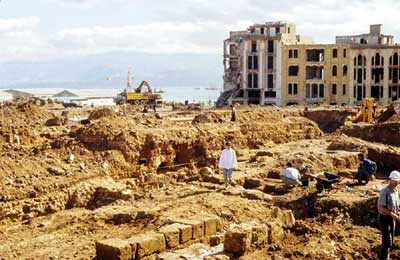 Only a couple of months ago CWA published Dominic Perring’s optimistic feature on Beirut’s archaeology. It was about the 12 year programme of archaeological study that accompanied the post-war reconstruction of the Lebanese capital and was full of references to rebuilding and renewal. At that time, it seemed unimaginable that war would return, but in the past few weeks this is exactly what has happened. We asked Dominic Perring to comment on the situation. Perring and colleague Assaad Seif write from the Lebanese perspective:

At times like this it is difficult to pay much heed to the archaeological consequences of war. It seems a petty matter in the midst of such destruction. But it is also necessary to plan for the future. And this means thinking about the past. Archaeology will matter when thought will turn to the cause of reconstruction, as we must hope can soon be the case. Archaeology will be a consideration in the engineering of reconstruction, in rebuilding the country, and in reaffirming national pride and identity. Environmental issues will need to be addressed from the outset. The effects of war go far beyond the immediate, and the need to re-settle refugees will involve new construction work in a country dense with vulnerable archaeological sites.

But the war is also damaging historic sites more directly. The sites most immediately under threat are those in the south. A preliminary survey of archaeological resources in this area was undertaken in 2001, as part of a Cultural Resource Management scheme to accompany plans for the socio-economic regeneration of the newly ‘Liberated Areas’. This survey identified more than 300 features and sites, most of which were archaeological structures incorporated within the modern fabric of villages that are currently under attack. It seems inevitable that some of these archaeological features have been destroyed as whole villages are erased by Israeli bombs. The villages within which they were located occupy hilltop locations dominating the surrounding plain, and many have been in continuous occupation since prehistory.

Such sites are also important places of worship. The re-use of cultic places and structures is a common phenomenon in the Levant, illustrated by the conversion of ancient and classical temples into churches in the Byzantine period and then into mosques and shrines during the Arab period. There is a wealth of archaeology here that has never been studied. The destruction of the villages of south Lebanon involves the destruction of Lebanon’s archaeological and architectural heritage. The human costs are greater, and the war is having a devastating effect on the intangible heritage of local tradition. Communities are separated, and it the village elders who are the least prepared to flee who are now being killed.

The World Heritage Sites at Tyre and Baalbek are also in the direct line of fire. Although the bombing has until now avoided the principal archaeological monuments, many fragile structures as well as wall paintings in the numerous hypogeums at Tyre are likely to have sustained damage. Bombs have fallen within 300m of the great temple at Baalbek, well within the limits of the Roman and Islamic town. Many of the modern buildings flattened in Tyre stand over archaeological remains – and clearance work here will have direct archaeological implications. Whilst the bombs in Beirut and Sidon have spared the historic centres, they create a situation in which the ongoing programmes of archaeological work and restoration have been interrupted and will be difficult to recommence.

The infrastructure targeted by the Israeli armed forces includes roads and bridges with ancient origins. An audit of the damage being done to bridges and viaducts is likely to reveal that important historic structures have been damaged or may become redundant in the process of repair. The Ottoman bridge at Arqa is one of those that have been destroyed.

In the latest development, Israeli sources have also threatened strikes against Lebanese government symbols (report in Ha’aretz dated August 7th), almost all of which can be considered to form part of the nation’s cultural heritage.We must hope that these threats are not realised, but there has already been one direct case of the deliberate destruction of a heritage site. The bombing of the prison at Khiam erased an important symbol of past injustice. The prison was built as a barracks for the French colonial power in 1933, but gained notoriety as the prison operated by the Israeli backed militia, the South Lebanese Army. For Lebanese people, it was a place of torture and oppression. When southern Lebanon was liberated in 2000 it attracted a flood of daytrippers, and was soon converted into a memorial of the liberation.

It undoubtedly had propaganda value for the cause of Lebanese resistance, but it had this value because it spoke to people of their recent past.

However the present situation is resolved, it will have long-lasting consequences for the archaeology and environment of Lebanon. The international community has a role to play in mitigating the effects of the present aggressions. UNESCO (pressed also by the Lebanese authorities) has recently reminded the Israeli and Lebanese Governments of their respective responsibilities concerning the 1954 Hague Convention, which provides for the safeguarding of cultural property in times of armed conflict. But international agencies have little to be proud of in their past engagement in the affairs of Lebanon. What matters most is that the Lebanese authorities are given the support that they require, are allowed to exercise their proper authority, and – above all – that the Lebanese people can be allowed to enjoy their past in peace.

Editors’ note – in response to our request for this item, Dominic Perring wrote: “It has been very difficult getting the balance of this piece right. Assaad and I both feel very upset about what is going on, and it is not possible to write about the damage of war in unemotional terms. At the same time we have tried to avoid drifting into politics. Some readers may consider this piece unbalanced because it deals only with the consequences of the Israeli attacks on Lebanon. But we can only write from our own experience, and the simple truth is that, in this case, there is no comparison between the levels of damage being exacted.”

CWA has asked Israeli archaeologists for their perspective on the conflict’s impact on Israel/Palestine’s heritage and we hope to bring this to you in an upcoming issue.

Dominic Perring and Assaad Seif will both be speaking at the ‘Archaeology in Conflict’conference to be held at the Institute of Archaeology, November 10th-12th. For further details see http://www.ucl.ac.uk/caa/