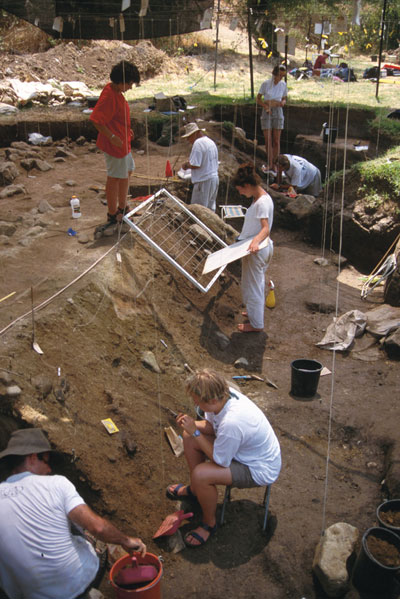 Researchers at the Hebrew University’s Institute of Archaeology say they have found evidence that sophisticated behavioural patterns that define what it is to be human go back as early as 750,000 years ago – half a million years earlier than previously thought.

The evidence comes from excavations at Benot Ya’aqov, located along the Dead Sea rift in the southern Hula Valley of northern Israel. In a report published in Science magazine, the authors describe an Acheulian layer rich in stone tools, animal bones and botanical remains. Analysing the spatial distribution of the finds, the authors say that specific areas were used exclusively for specific activities. According to the site director Professor Naama Goren-Inbar, ‘this kind of designation indicates a formalised conceptualisation of living space, requiring social organisation and communication between group members’.

Such organisational skills are thought to be unique to modern humans and are conventionally associated with Middle Palaeolithic sites, where activity areas, particularly those associated with hearths, have been found dating back some 250,000 years. The Acheulian layer at Gesher Benot Ya’aqov has been dated to about 750,000 years ago and has one discrete activity area characterised by abundant evidence of flint tool manufacturing and another with a high density of fish remains, suggesting the processing and consumption of fish.

A greater variety of activities was found in the hearth area but still spatially restricted to that area, including the processing of basalt and limestone and the use of large stone tools such as hand axes, chopping tools, scrapers, and awls. The presence of stone hammers and pitted anvils suggests that nut processing was also carried out near the hearth.