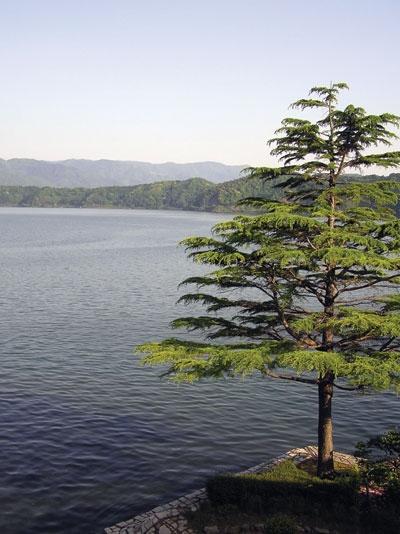 Archaeologists will be able to determine the age of ancient objects much more precisely following a breakthrough in radiocarbon dating using sediments from Lake Suigetsu in Japan.

Radiocarbon, or C-14, is a naturally occurring, radioactive isotope of carbon that is continuously produced in the upper atmosphere and becomes incorporated into all living organisms. Once the organisms die, the isotope decays at a known rate, and archaeologists can use this to calculate the age of something by comparing how much radiocarbon remains in it.

Until recently, the only known direct record for atmospheric carbon was provided by tree rings, and extended back just 12,593 years.

Now, in a study recently published in Science, a series of cores extracted from the bottom of Lake Suigetsu has provided organic material – including fossilised leaves and twigs – dating back 52,800 years. Researchers had been examining the site since 1993, when it was realised that layers of algae and sediment blanketing the lake’s floor had lain undisturbed for tens of thousands of years, but initial attempts to date samples failed amid technical difficulties.

‘In short, this is the realisation of a 20-year-long Japanese dream,’ said project leader Professor Takeshi Nakagawa, from the University of Newcastle. ‘Suigetsu can be a benchmark against which other records are compared.’

In order to construct a record for Lake Suigetsu, the team measured radiocarbon in plant fragments found throughout the sediment cores, obtaining around 800 separate dates. They also used X-ray fluorescence, which identified chemical changes along the cores, to count light and dark layers deposited throughout the glacial period, enabling them to place these measurements in time.

The researchers hope that being able to determine dates more accurately will shed light on key developments, such as the timing of the extinction of Neanderthals or the spread of modern humans into Europe.

‘This record will not result in major revisions of dates, but in prehistoric archaeology there will be small shifts in chronology in the order of hundreds of years,’ said Professor Christopher Bronk Ramsey at the University of Oxford. ’Such changes can be very significant when you are trying to examine human responses to climate that are often dated by other methods, such as through layer counting from the Greenland ice cores. For the first time we have a more accurate calibrated time-scale, which will allow us to answer questions in archaeology that we have not had the resolution to address before.’