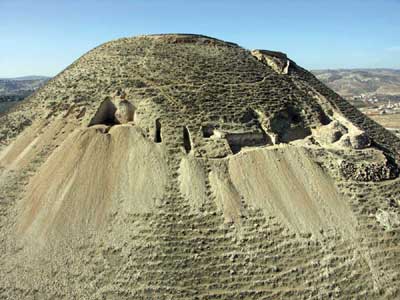 When archaeologists at the New Hebrew University announced last year that they had found Herod’s sarcophagus at Herodium, the identification was challenged as ‘plausible but not proven’ by a number of commentators. Now Prof. Ehud Netzer, head of the team that found the late 1st century BC tomb, has reiterated the claim in reporting on the current season’s excavations.

Firstly, Prof. Netzer’s reconstruction of the mausoleum, based on the excavated evidence, shows a lavish two-storey building with a conical roof, about 25 metres (80 feet) high. According to Prof. Netzer, such a structure ‘is fully appropriate to Herod’s status and known extravagant tastes’.

Secondly, the sarcophagus that was found within the mausoleum had been broken into hundreds of pieces; hammer marks show that it had been intentionally destroyed. Prof. Netzer links this to the rebels who occupied the site during the First Jewish Revolt against the Romans in AD 66, saying that the Jewish insurgents ‘reviled the memory of Herod as a Roman puppet; the violence inflicted on the sarcophagus suggests they knew it held the king’s bones.’

In part, the claim also rests upon the identification of the site being excavated by Ehud Netzer’s team as Herodium, the desert retreat that Herod built and that is described in the writings of the Roman historian, Flavius Josephus. This lavish palatial complex represented the pinnacle of Herod’s many monumental building projects. The latest excavations have uncovered further evidence to link the identification of this site, located eight miles south of Jerusalem, with Herodium: the remains of a theatre have been found decorated with wall paintings in a style that was popular in Rome and Campania around 15 to 10 BC, depicting windows opening on to landscapes, one of which shows a southern-Italian-style country villa.

The dating of the wall paintings makes it reasonable to assume, says Prof. Netzer, that the theatre was built for the visit of the Roman general and politician Marcus Agrippa to the Herodium in 15 BC. •