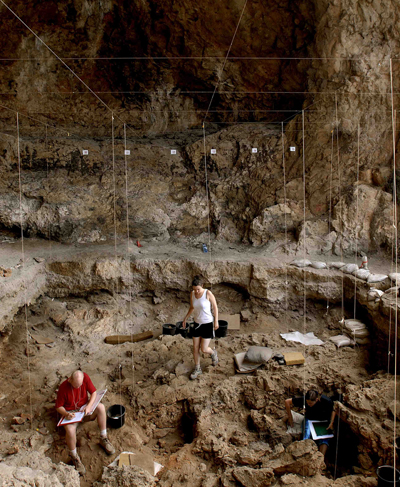 Archaeologists have found the remains of 71 tortoises and three wild cattle while excavating Hilazon Tachtit Cave, in Galilee, northern Israel. The remains date from 12,000 years ago and are believed to be the earliest evidence yet found for communal feasting. The meat from the tortoises alone would have fed at least 35 people, it is estimated.

Dr Natalie Munro from the University of Connecticut, United States, and her colleague Leore Grosman, of Hebrew University in Jerusalem, found the tortoise shells and cattle bones situated under, around, and on top of the remains of a ritually buried shaman, which suggests that the first feasting probably took place in association with funerals.

‘The appearance of these feasts at the beginnings of agriculture is particularly interesting,’ says Dr Munro, reporting the find in the journal Proceedings of the National Academy of Sciences. Dr Munro believes that banquets like this were organised to foster community spirit at a time when the population was growing, causing the landscape to become crowded.

Settlement can place tremendous pressure on local resources, increasing the likelihood of tension. This combination of greater social interaction and over-use of wild resources ‘eventually led to the beginnings of agriculture’, Munro argues, ‘and to the domestication of the most intensively used plants and animals’.

Whereas hunter-gatherer groups could easily split into smaller groups and go their own separate ways in the event of disputes, sedentary communities had to find other ways of resolving conflict as the group size expanded and people came into contact with each other on a more regular basis.