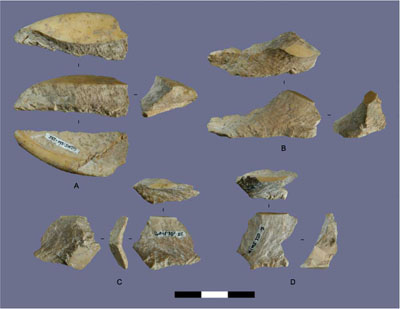 Dr Katherine Szabó, of the University of Wollongong, has challenged the orthodox view that the early inhabitants of Australasia lacked sophisticated tool-making skills by showing that shells were the basis of their technology, rather than bone or stone.

The absence of the sort of increasingly complex tools found in Africa and Europe from East and Southeast Asia, Australia and New Guinea until the last 4,000 years has led archaeologists to conclude that the region was culturally static. Far from it, argues Szabó: having excavated shell tools dating back 32,000 years from a cave site in eastern Indonesia, she believes they are more sophisticated than stone tools. ‘The shell tools had been carefully chosen and shaped and were, in fact, much more complex to produce than the stone tools,’ she says.

Australasia’s high diversity of marine molluscs makes shell the logical choice of raw material, along with organic materials such as bamboo, for tools and weapons in a region that lacks easily worked stone. Despite this, shell is not a material that anyone has looked at in detail nor understands very well.

‘The story is that stone tools encapsulate the story of humanity,’ says Szabó, ‘but if we’re an adaptable, flexible species, living in a range of habitats around the world, from the sub-arctic to the humid tropics, then we should really expect to see a lot of variation in the way that humans are going about solving problems.’ •