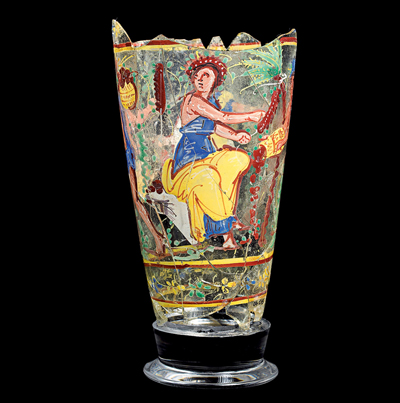 In 1978, a year before the Soviets foolishly decided to invade Afghanistan, a team of Russian and Afghan archaeologists were excavating a site called Tillya Tepe – literally ‘Hill of Gold’ – high in the Afghan mountains. The site is actually a tell, into the top of which were dug six different burials: as the archaeologists dug, they realised that the graves had never been robbed, or even disturbed. Within lay the remains of five women and one man, together with an incredible array of finds. These were breathtaking: thousands of intricate and delicate examples of gold jewellery belonging to nomadic elites, and dating to the Bactrian kingdoms of the 1st century AD.

The director of the excavations, Viktor Sarianidi, was elated and promptly catalogued and published the finds. Then came the Soviet invasion. A decade later, in the dying days of Afghanistan’s Communist regime, these fabulous treasures disappeared. Rumours were rife that they had been sold into the shadowy antiquities black market to bankroll one or other warlord’s quest for power in the subsequent civil war, or destroyed by Taliban zealots who ransacked the National Museum, smashing anything they deemed idolatrous. Because no-one could be sure what had happened to them, Sarianidi himself came under a cloud and was suspected of engineering their disappearance. Whatever the explanation, the archaeological world sadly resigned itself to the probability that these wonderful treasures would never be seen again.

Then came the NATO invasion, and whispers began to circulate that the treasures were not lost, but concealed. Eventually, in 2003, some crates were tracked down in the high-security Presidential vault. No-one knew what they contained. The keys had been lost, locksmiths could not open them, and eventually a circular saw was brought in to saw off the top of the crates. Inside were a mass of plastic bags containing what appeared to be the wonderful golden objects from Tillya Tepe: but were they genuine? Victor Sarianidi carefully examined them, till eventually he came to one and exclaimed, ‘Look, here is a repair that I made: it must be authentic!’

Slowly the truth emerged. Sometime in the late 1980s a team of Afghan curators, correctly predicting the catastrophe that was about to engulf their nation, had secreted the treasures away, at considerable risk to their own lives. These heroic actions shielded them from the ensuing turmoil. Now, once again the treasures have been reassembled: but how best to preserve them?

The political situation in Afghanistan is still, unfortunately, somewhat unstable, so if you are the curator of the National Museum of Afghanistan, how best do you look after your treasures? The answer is to send them off round the world in a travelling exhibition that showcases the glorious riches of Afghanistan’s culture and, hopefully, ensures their safety. Having gone round America, they have also been the stars of blockbuster exhibitions in Turin, Paris, and Bonn. The next leg of their world tour will bring them to the British Museum, so on a cold, snowy morning in November I went along to the museum to hear all about the forthcoming exhibition.

It is subtitled Crossroads to the Ancient World. We often think of Afghanistan as being somehow at the end of the world, but that is quite wrong. In fact, it should really be seen as the hub of the world, both at the heart of the Silk Road linking China with the West: and the crucial link between the nomads of the Russian plains and the civilizations of India. This exhibition sets the record straight by displaying over 200 objects found between 1937 and 1978.