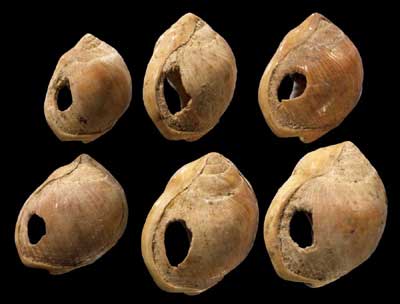 The recent discovery of a collection of perforated shells that appear to be beads, and dating back 76,000 years, are set to rock our understanding of modern human development. If this analysis is correct, then symbolic communication – and potentially the allied development of language – is 30,000 years older than previously thought.
The 41 tick shells are punctured with holes, each in the same place, and roughly one centimetre across. Christopher Henshilwood, a professor at the Centre for Development Studies of the University of Bergen in Norway, and his team found the shells at Blombos Cave site, 300 km east of Cape Town, South Africa. They are currently being investigated in collaboration with a French team headed by Drs Francesco d’Errico and Marian Vanhaeren of the University of Bordeaux as part of an European Science Foundation programme, OMLL (Origin of Man, Language and Languages).
Until now, the oldest beads found in Africa were about 45,000-years old. It was at this time modern human behaviour – a key aspect being symbolic communication – was believed to have arisen, according to the then-dominant theory. However, this new discovery supports the idea that modern human behaviour developed earlier, and more gradually throughout the Middle Palaeolithic.
Found in clusters of two to 17, the shells are of a tiny mollusc (Nassarius kraussianus) that lived in estuaries. The team have ruled out the possibility that they were deposited there naturally for the different groups of shells are comparable in size, shade, and perforation size. They also have a similar use-wear pattern, consistent with friction from rubbing against thread, clothes or other beads. Microscopic residues of ochre detected inside the shells suggest the beads were in contact with something coloured red.
Last year, Blombos Cave also yielded two pieces of 77,000-year-old ochre, cut with abstract patterns. It is generally believed that full syntactical language is a requisite to share and transmit the symbolic meaning of beadworks and abstract engravings such as those found at the cave.