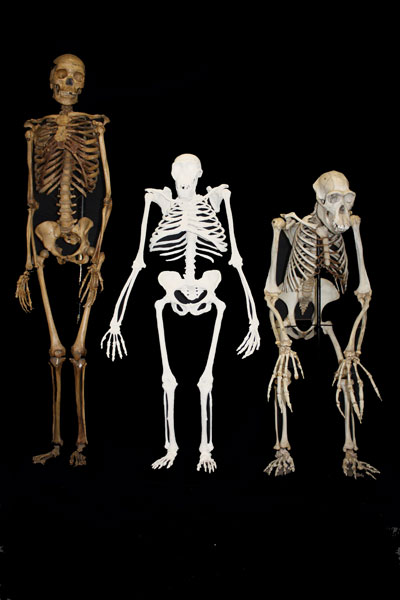 Australopithecus sediba had a mixture of primitive and modern anatomical features, and a unique way of walking, newly published research says.

The first fossilised remains of the hominid, which lived around two million years ago, were found in 2008 (CWA 41), at Malapa, 48km (30 miles) north of Johannesburg in South Africa.

Now, six new papers by experts from 16 global institutions have been published in Science. Drawing on analysis of three A. sediba specimens, the research sheds new light on how they walked, chewed, and moved.

Among the team’s findings are insights into how the human arm evolved, and how its primary function changed from locomotion to manipulation. Excluding the hand and wrist, A. sediba’s long arms are mostly primitive – suited to climbing, but indicating that the transition to using the forearm mainly for manipulation was a later development, probably linked to the rise of Homo erectus.

The study also provides new information on how the chests of early hominids developed. Precisely when the cylindrical thorax of humans and their immediate ancestors emerged has long been controversial, as most fossil rib specimens are very fragmentary. A. Sediba had a narrow upper body and high, permanently ‘shrugged’ shoulders, like an ape, but a slender, human-like waist and curved lower back. This would have aided climbing and hanging from trees, but made swinging the arms while walking or running difficult.

Analysis of A. sediba’s lower legs also suggest that it moved clumsily, walking ‘pigeon-toed’, and favouring the side of the foot rather than the heel. This is interpreted as an anatomical ‘compromise’ for a hominid that had adapted to bipedalism but still needed to climb efficiently.

The make-up of A. sediba’s foot is distinct from that of other australopithecines such as A. afarensis (e.g. ‘Lucy’, see CWA 32) and A. africanus, but its teeth and jaw indicate that it is more closely related to A. africanus, the team add.

‘Such clear insight into the anatomy of an early hominin species has implications for interpreting the evolutionary processes that affected the mode and tempo of hominin evolution, and the interpretation of the anatomy of less well-preserved species,’ said lead author Professor Lee Berger of the University of the Witwatersrand.