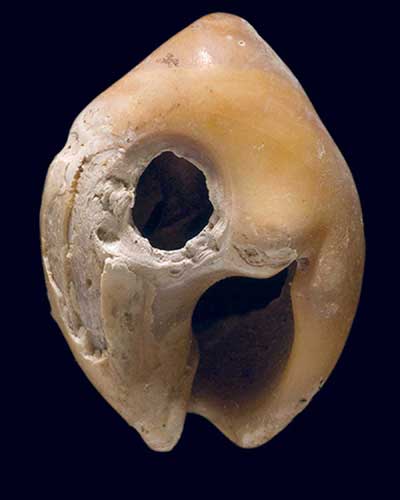 Perforated shells stained with red ochre currently constitute the earliest evidence we have for a sophisticated symbolic material culture among anatomically modern humans. That said, the date at which this phenomenon occurs is not fixed, and keeps receding deeper into the past as new discoveries are made. The Blombos cave in South Africa is cited in recently published text books as the leading the ‘bead race’ with 41 Nassarius shell beads that can confidently be dated to 72,000 years ago.

This date was beaten two years ago by the discovery of perforated shell beads at the Grotte des Pigeons at Taforalt, a limestone cave in Eastern Morocco dating from 82,000-year-old Aterian deposits. Now, more beads have been found in even earlier layers, and while the University of Oxford team that made the discovery awaits the exact dates for these layers, research team leader, Prof. Nick Barton, is arguing that they could be up to 110,000 years old, dating from the origins of the Aterian culture in Morocco.

‘These new finds are exciting,’ he said, ‘because they show that bead manufacturing probably arose independently in different cultures and confirms a long suspected pattern that humans with modern symbolic behaviour were present from a very early stage at both ends of the continent, probably as early as 110,000 years ago.’

Joint leader of the research team Dr Abdeljalil Bouzouggar, from the Institut National des Sciences de l’Archéologie et du Patrimoine in Morocco, said: ‘The archaeological and chronological contexts of the Taforalt discoveries suggest a much longer tradition of bead-making than previously suspected, making them perhaps the earliest such ornaments in the world.’

Excavations in April 2009 also continued in the upper levels of Taforalt to investigate a large well-preserved cemetery dating to around 12,500 years ago. The project, co-ordinated by Dr Louise Humphrey, from the Natural History Museum in London, has found adult as well as infant burials at the site.

The infant burials throw an interesting light on early burial traditions as many of the infants seem to be buried singly beneath distinctive blue stones with the undersides smeared with red ochre. By contrast, studies by Dr Elaine Turner of the Römisch Germanisches Zentralmuseum, Mainz, show that the adults’ grave pits were generally marked by the horn cores of wild barbary sheep. Taforalt remains the largest necropolis of the Late Stone Age period in North Africa presently under excavation. •