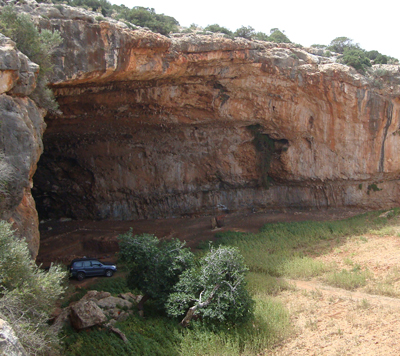 Estimates for the date at which early migration out of sub-Saharan Africa occurred vary from 200,000 to 80,000 years ago, the older dates being based on estimates of the rate at which genes mutate. Hard archaeological evidence is elusive, but the excavation of what is being called ‘the deepest archaeological trench in North Africa’ has now proved that modern humans were living on the north coast of Libya at least 80,000 years ago; the question now is just how much further back they go.

The trench, in the Haua Fteah Cave, was first dug in 1951 by Cambridge academic Professor Charles McBurney. Professor Graeme Barker, Director of Cambridge’s McDonald Institute for Archaeological Research, is now leading an expedition made up of 30 academics from ten research institutes in a re-excavation and re-appraisal of McBurney’s 14-metre-deep trench.

‘McBurney’s work made a seminal contribution to world prehistory,’ explained Professor Barker. ‘With techniques available to him in the 1950s, he concluded that the trench spanned about 80,000 years of history. He believed the human jaws that he discovered deep down were pre-modern in anatomy and that modern humans (Homo sapiens) did not arrive in North Africa until around 40,000 years ago, which is about when they reached Europe.’

Having removed the sediment that McBurney used to re-fill the trench, the Cambridge team have now reached a depth of 10m, and so are just below the strata in which the jaws were discovered. The jaws have now been identified as belonging to Homo sapiens, and OSL (optical stimulated luminescence) dating, which measures the last time grains of quartz were exposed to sunlight, has dated the layers around the skulls to between 80,000 and 90,000 years old.

‘Now that we have the first definite evidence for our species being in North Africa at least 80,000 years ago, the question is whether they were behaving in ways we would recognise as modern. We are looking for evidence of their technologies and hunting practices and their level of cognition,’ explained Professor Barker. ‘And since we have another 6m to go before we hit bedrock, the deepest archaeological trench in North Africa has potentially a 200,000-year-old story to tell.’