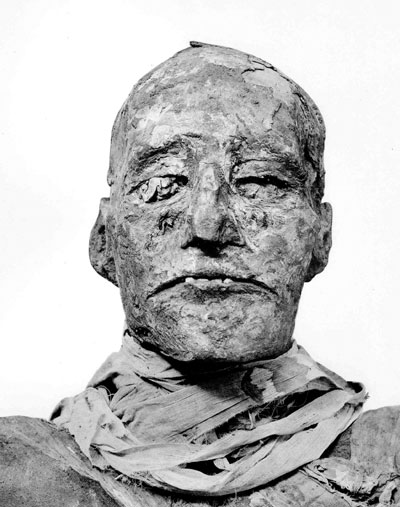 Ramesses III was murdered, probably during an attempted coup, say archaeologists following new analysis of the Egyptian king’s mummified remains. They believe they have also identified his son, one of the conspirators.

The Turin Judicial papyrus records an attempt on the life of the 20th-Dynasty pharaoh in 1155 BC, the final year of his reign. Known to Egyptologists as the ‘harem conspiracy’ and led by Tiye – one of the king’s secondary wives – and their son Pentawere, the coup failed, but it has long been debated whether the assassination attempt succeeded.

Now, CT scans of the pharaoh’s mummy, recently published in the British Medical Journal, have revealed a deep cut across his throat that previously had been hidden beneath a thick collar of linen bandages. Severing the trachea, oesophagus, and major blood vessels, the wound would have killed the pharaoh instantly.

The images also revealed that a wedjet (Horus eye) amulet had been carefully placed inside the cut.

‘These findings prove clearly that the pharaoh was murdered,’ said project co-director Dr Albert Zink, of the European Academy of Bolzano/Bozen (EURAC). ‘The amulet was placed in the wound after his death to enable him to recover fully for the afterlife.’

At the same time, the team have identified a candidate for the mummy of Prince Pentawere, who took his own life after being found guilty of conspiring against his father. The remains of the 18- to 20-year-old ‘Man E’ were found in the same royal cache as Ramesses III at Deir el Bahari, though his identity had not previously been established.

‘What caught our attention was the fact that the body was rather inflated, and there was a strange skin fold on his neck,’ said Dr Zink. ‘This could have been the result of committing suicide by hanging.’

Bone samples from both mummies revealed identical Y chromosomal DNA, strongly suggesting a father–son relationship, although to prove conclusively that this is Pentawere the researchers would also need DNA from his mother, whose remains have not yet been found. However, the team point to Man E’s unconventional embalming to strengthen this identification.

‘He had been mummified without the removal of his organs or brain,’ said Dr Zink. ‘Furthermore, his only cover was a goat’s skin, a material considered ritually impure by the ancient Egyptians.’

The team suggest that being buried in this way could represent a further punishment for the patricidal prince.