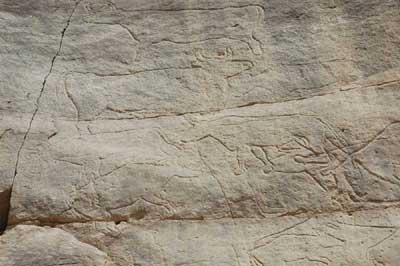 Archaeologists have just announced the discovery of the oldest graphic activity ever recorded in Egypt. The naturalistic-style prehistoric art, dubbed ‘Lascaux on the Nile’, is argued to be both chronologically and aesthetically closely comparable to the great Palaeolithic art traditions known from Europe. The rock art was found this February and March on the east bank of the Nile at Qurta – about 60km north of Aswan – by a Belgian mission directed by Dr Dirk Huyge of the Royal Museums of Art and History in Brussels.

Huyge and his colleagues had already found similar style art in 2004 on the western bank of the Nile at el’Hosh – about 10km north of where the current discoveries were made. At that time they found naturalistic art including several images of cattle executed in a Palaeolithic ‘Franco-Cantabrian, Lascaux-like’ style.

Back in the early 1960s, the Canadian Prehistoric Expedition also recorded a number of comparable cattle images – but over on the east bank of the Nile. The Belgian mission decided to relocate the rock art found by the Canadians. In 2005 their attempts were successful – the ‘Canadian’ sites were relocated near the modern village of Qurta, along the northern edge of the Kom Ombo Plain.

Thereafter the Belgian mission began an intensive survey of the Nubian sandstone cliffs immediately east of the village of Qurta. They were rewarded by the discovery of three spectacular rock art sites designated Qurta I, II and III. At each of these sites several panels and individual figures were identified, totalling at least 160 individual figures. In the main, these are naturalistically drawn animal figures. The ancient artists used both hammering and incision to create the images. Images of cattle predominate – with at least 111 examples identified. These are followed by birds (at least seven examples), hippopotami (at least three examples), gazelle (at least three examples), fish (two examples) and ass (one example). In addition, there are at least seven highly stylised representations of human figures. These are shown with pronounced buttocks, clearly an important asset to the ancients, but no other bodily features. Modern dieters take heart. But to when does this rock art date? Dating is always a difficult issue with rock art. Typically all the archaeologist can do is to assess the patination and weathering, analyse the animals depicted and the style used, and to look at the wider site or landscape for cultural clues.

In the case of the Qurta sites, the drawings are heavily weathered and patinated, which suggests an old age for the art. As for the animals depicted, none shows any evidence for domestication, a process that seems to have begun by the 9th millennium BC at the earliest. Rather, the cows are Bos primigenius or aurochs (wild cattle), suggesting a pre-9th millennium date. In terms of style, the Qurta rock art is quite unlike any rock art known elsewhere in Egypt. It is substantially different from the ubiquitous ‘classical’ Predynastic rock art of the 4th millennium BC, which is known from hundreds of sites throughout the Nile Valley and the adjacent Eastern and Western deserts. Finally, the wider landscape offers some vital clues to the date of the art.

Thus, when the Canadians worked in the area, they discovered and excavated several Late Palaeolithic settlements in the vicinity of the rock art sites. The most important of these is the Palaeolithic site of GS-III, which lies only 150 to 200m from the Qurta I rock art site. At GS-III the archaeologists found several fragments of sandstone upon which linear grooves had been incised; in one case they formed several deep parallel grooves. This provides proof that the Late Palaeolithic inhabitants of the Kom Ombo Plain practised the technique of incising sandstone, even if it does not prove that they were the artists. The Palaeolithic sites found by the Canadians and indeed other missions in the Kom Ombo Plain in the early 1960s have been dated to about 16,000 to 15,000 years ago (all belong to the so-called Ballanan-Silsilian culture of this date). Climatologically this corresponds to the end of an hyper-arid period, preceding a return of the rains and the ‘Wild Nile’ stage of about 14,000-13,000 years ago.

The Ballanan-Silsilian sites – and other Late Palaeolithic sites – in the Kom Ombo Plain have also revealed evidence of their economy. It seems they were hunters and fishermen who used both the water and the desert for food resources. Based on the animal bones found at these sites we know they had a penchant for aurochs (wild cattle), hartebeest, some species of gazelle, hippopotami, wading and diving birds (including numerous goose and duck species) and some fish species.

With the exception of hartebeest, this faunal inventory perfectly matches the animal repertory of the Qurta rock art sites. Both in the Late Palaeolithic faunal assemblages and in the rock art large ‘Ethiopian’ faunal elements, such as elephant, giraffe, and rhinoceros, are conspicuously absent. This too is taken as potential support for a date of around 15,000 years ago for the rock art. To the Belgian mission ‘There remains therefore little doubt that the rock art of Qurta must be about 15,000 years old.’ If this is the case then the Qurta art constitutes the oldest graphic art ever recorded in Egypt. ‘It provides clear evidence that Africa in general and Egypt in particular possesses prehistoric art that is both chronologically and aesthetically closely comparable to the great Palaeolithic art traditions known for a long time from the European continent. The rock art of Qurta, which is truly a ‘Lascaux along the Nile’, should therefore be preserved at any price’, concludes project director Dirk Huyge. Because of the amount of rock art present at Qurta and the extremely difficult recording conditions – scaffolding has been constructed at several locations and the recording work has not yet been completed – it will be the subject of another campaign by the Belgian mission in early 2008.