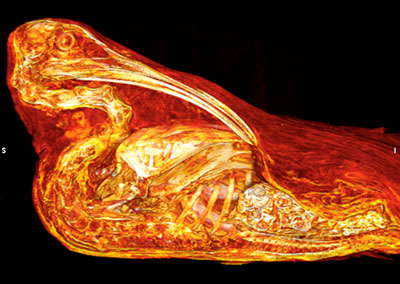 Egyptian birds were expected to live on in the afterlife, just like their human counterparts, according to new research published in the Journal of Archaeological Science.

Using computed tomography (CT) scanners to examine two mummified ibises and a hatchling, an international team of scientists discovered that embalmers had returned the adult birds’ gizzards filled with their last meals of snails and small fish, and had packed the chick with grain, to ensure they, too, would not go hungry.

Andrew Wade, from the University of Western Ontario, said:
‘It suggests the provision of an afterlife food-source for the birds, and lends support to the idea that the viscera of ibises and humans alike were meant to continue their living function in the afterlife.’

The sacred ibis (Threskiornis aethiopicus) is now extinct in Egypt, but these birds were once embalmed in vast numbers as votive offerings to Thoth, the god of wisdom, who was often depicted with an ibis’ head. About 1.75m of these mummies have been excavated at the royal necropolis of Saqqara, while over 4m were found in the catacombs of Tuna el-Gebel.

‘We were very excited to work with these animal mummies as they are often under-appreciated in spite of the information that they can tell us about Egyptian ideology and mortuary practices, political economy, and identity,’ said Wade.