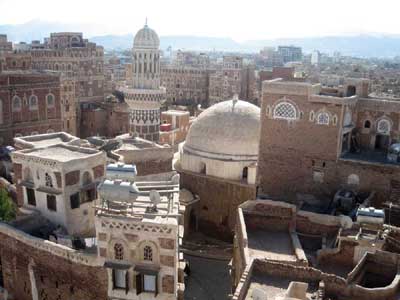 There are perhaps some remote destinations that are best visited as part of a tour group. There is nothing better than having a specialist guide and an excellent itinerary for the culture-hungry. In the late 1990s, CWA‘s Editor Nadia Durrani was often to be found excavating a limestone temple on the Yemeni coast, and this January she returned to Yemen to lead a tour through one of her favourite countries. Here she recalls the highlights.

Yemen, nestled just below Saudi Arabia, is an archaeologist’s dream. To the Classical writers it was known as Arabia Felix (or Happy Arabia). These writers, including Strabo and Agatharchides, described it in semi-mythical terms. They told of its abundant spices, free-flowing gold, and of its ubiquitous frankincense and myrrh trees whose heady fragrance would intoxicate all who came near.

Certainly, in the 1st millennium BC, Yemen had grown rich, in part, from the incense trade. All along her trade routes, great cities arose, monumental inscriptions were drafted, and limestone temples erected.

One of the most important cities was that of Marib, the thriving capital of the mighty Sabaean kingdom from where the Biblical Queen of Sheba is said to have ruled (though much to their chagrin, archaeologists are yet to find any trace of this elusive lady).

Today, Marib is a remote and unpopulated place and is notoriously difficult to visit. Indeed, digging one of its temples proved such an adventure in the 1950s that the gung-ho Hollywood archaeologist Indiana Jones is said to be based on its excavation director. These days, two international teams are at work in Marib, but whether travellers can visit varies from year to year, season to season, depending on various elements. This year, owing to poor security in the region, we could not visit, but many other treats were in store.

Thus our January 2008 tour began in Yemen’s capital, Sana’a, up in the balmy central highlands. Sana’a is a delight. The Old City is an UNESCO World Heritage Site (see CWA14). Its high mud walls hardly constrain the city’s crop of finely-decorated multi-storey tower-houses. First we explored the Old City’s narrow streets, where the sun barely grazes the ground. Thereafter, we made our way into its suq, a haven of stalls piled high with spices, sweets, dates, and coffee beans. The air, just as in classical times, is heavy with incense – and with the hullabaloo of children, goats, and donkeys.

From Sana’a, we flew across to the Hadramaut in the far east of Yemen, effectively following the passage of the famous pre-Islamic spice route that ringed the inland desert. We now entered new territory. The Hadramaut is marked by bare, flat, table-top mountains known as jols, and deep fertile valleys. Until recently, few westerners had visited this wild and beautiful place – the travel-writer and photographer Dame Freya Stark (1893-1993) being one of the few notable exceptions.

The Hadramaut was the seat of one of the four mighty pre-Islamic kingdoms that vied with the Sabaeans for domination of the incense route. It also boasts one of the world’s most spectacular still-inhabited traditional cities: Shibam, which is aptly dubbed ‘the Manhattan of the desert’ owing to its glut of mud-brick sky scrapers.

Then on, our clockwise convoy continued down to the southern coast and on to the chalk-white beaches at Bir Ali, or ancient Qana. This was the southern-most point of the great incense route and has been the subject of much archaeological work. From there, we ventured along the southern coast to the south-western corner of Yemen. In crepuscular light we arrived at Aden, the port and former British colony. Today, Aden is a rather uninspiring city dominated by row upon row of tired colonial workaday architecture. It is hard to level this with the medieval Islamic accounts of Blessed Aden with its riches and fabulous architecture. However, it was fascinating to hear the reminiscences of two members of our group who had served in Aden during the 1960s before the British were ousted.

From Aden, we journeyed up the Red Sea asphalt coast road. With every mile, the heat increased. We were on the Tihamah plain. This is where I spent various white-hot Christmases digging a temple site in the 1990s. We had been excavating the remains of al-Hamid, a settlement dating to c.800-500 BC with its small but formidable temple – akin to those known from the Yemeni inland. The temple, plus a clutch of inscriptions, indicates that al-Hamid was somehow linked to Sheba’s’ Sabaean kingdom centred in the interior some 200km away. Could it be that our site was a Sabaean outpost en-route to the Ethiopian highlands where other similar Sabaean-related sites are to be found in the early 1st millennium BC? The evidence is compelling.

Our tour skirted al-Hamid to pause at the stone circle of al-Muhandid, Yemen’s very own Stonehenge, albeit on a smaller scale (each monolith is about 1m-3m high). Like so many sites in Yemen, the circle lies unexcavated. Yemen is certainly a land with much still to be discovered and each new project thus makes a considerable contribution to the scholarship.

Then on and up we ventured to the Central Highlands. This is the Yemen many might picture: a country of plunging mountains rippled by terraced fields, and marked by attractive stone tower houses that bite onto precarious cliff edges. As we breathed the freshest, most intoxicating highland air, we agreed that now we were in Arabia Felix. How good it was to be back in the land of myrrh, frankincense and (a little) gold.