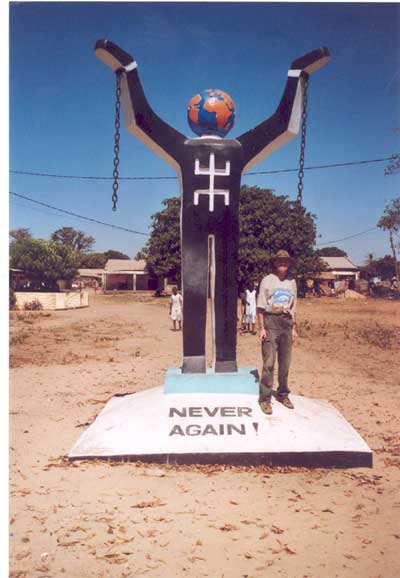 This year marks the 200th Anniversary of the abolition of Slavery in the British Empire. CWA20 ran a feature on the archaeology of slavery in Ghana, but what remains of the slave trade settlements in Senegal, Gambia and Guinea Bissau? While touring West Africa, I decided to find out.

My first stop was Fort Bullen, just outside Banjul, the capital of Gambia. It is approached by a crowded ferry over the Gambia River. The riverside fort was built in 1816 to stop the slave trade operating from the Gambia River.

Some of its interior and original cannons remain intact, but it also has a more modern platform for the traditional hoisting of the Union flag. During the Second World War, the Fort was put to use as an observatory and artillery base by the British Army as a means to protect against a possible attack from the French Vichy Government that was controlling Senegal. I was the only visitor there and felt that this symbol of the anti-slavery movement and our colonial past deserves better.

Yet for most travellers the only introduction to Gambia’s slave trading history is the ‘Roots’ tour operated weekly by a couple of tour operators. It is named after Alex Haley’s book Roots: The Saga of an American Family. This sanitised tour follows the story of Alex Haley in his search to find the place where his ancestor Kunte Kinte was captured and sold into slavery in the 1780s.

There, travellers are welcomed by traditional singers and dancers and then taken to the museum, a 19th century Lebanese former warehouse. Within the museum the history of the slave trade in the area is told largely through posters, indeed the only relics of the trade – leg irons – have been borrowed from Ghana. From the museum, it is a short walk to the village of Juffreh, again made famous in AlexHaley’s book as the home of his ancestor. There, visitors are met by the mayor and a descendant of the Kinte family, now an elderly lady. The tale of Kunte Kinte, who was surprised by a slave trading party and captured and sold as a slave in America about 1778 is true, the site of his capture is not.Kinte is a common family name in West Africa and there are two former slave trading settlements visible from the village.

Nevertheless the tour is a good introduction to the dark side of our history. Most people just stay round the tourist market, but there is a ‘Roots’ trail which takes you to the remains of several buildings associated with the trade including a ruined 15th century Portuguese church and a ruined 18th century French trading station. For a village that has a constant stream of tourists and a tourist market, little money appears to stay in the village.

It has mud brick houses and unpaved streets, just like all the other riverside villages that hardly ever see tourists. One is then ferried to James Island, a Danish then British fort on a small island which could control the trade along the river.

Similarly few tourists venture upstream to Georgetown in eastern Gambia. Here, locals will show you warehouses that once held slaves, or so they claim. In fact, the warehouses were built long after the trade was stopped and there is little evidence for the trade in this area.

There are three surviving circles, 20-30m in diameter with 1-3m high pillars; all the circles appear to have been built during the 1st millennium AD.

There are further major slave-related remains to the north of Gambia, on the island of Goree just off the coast of Dakar, Senegal’s sprawling capital city.

The island and its slave trading remains have been made a World Heritage site. The island does not attract many tourists and since trade moved to the mainland with the development of Dakar, there has been little development for 150 years.

Many of the slave trading villas were turned into residential houses, while later warehouses were built and abandoned as was the Governor’s house and the fortresses. The buildings fell into decay. However, there has been some recent development: a couple of the houses have been converted into small hotels and the island is a good place to wander round when the last day trippers have returned to the mainland. Moreover, a number of the slave houses have been restored.

One is now open as a museum: a large villa, with the owner’s apartment above the cellars where up to 150 men, women and children were kept in chains. This is the place for the dignitaries, such as Bill Clinton, to visit. There is also a millennium monument on the island, paid for by Spike Lee, the film director. It was also used as the island in the film, ‘Guns of Navarone’.

Further north is another relic of colonial grandeur, the island of St Louis, again a World Heritage Site. St Louis was the capital of French West Africa for 100 years and holds many decaying 19th & 20th century buildings associated with its days as the colonial capital. Loads of art deco buildings, a memorable fish market and the Governor’s Palace, ornate balconies grafted onto an 18th century fort originally built by the French to control the area for slaving.

Gambia is an ideal base for visiting a rarely visited country: Guinea Bissau, one of the poorest countries on earth. It is easy to get a visa at the consulate in Gambia and there is a regular bus service via Ziguinchor in southern Senegal and crossing the border is easy. The only hitch is that the area has a Foreign Office warning notice, which means your travel insurance is liable to be invalid.

However, I was assured that the trouble was caused by a few bandits stopping and robbing the buses and shared taxis. When travelling through the area I noticed a heavy police and army presence and no signs of any trouble.

Very few tourists visit Guniea Bissau, in fact when I was there I saw no other tourists. Travelling here turns from a holiday into an expedition, but it is worth it. You will ride a crowded bus, probably endure regular police checks on the bus and occupants, then wait for ever for the ferry. But there is no hassle from the locals and I always felt safe. The few hotels charge western prices, catering to the few foreign businessmen and aid workers. As for the sights, the country used to be Portuguese Guinea and you see the old colonial buildings, now in need of restoration. There is an impressive Portuguese fort, now the army headquarters and the only place where photography would be unwise. Guniea Bissau has colourful markets, but no T-shirts or postcards on sale. However, the signs of its revolutionary past are very much in evidence – including an abandoned presidential palace that was burnt out after a coup in the 1990s and a memorial to Che Guevara, though Marxism is on the wane. In the countryside, mud brick is the usual building material and the economy is subsistence agriculture, but there are no obvious signs of famine as in Sudan or civil unrest as in Somalia.

Since few tourists visit Guniea Bissau, tourist facilities have closed. I decided to visit the Rio Cacheu National Park – an internet search had shown it to be a thriving place. I spent the day bumping along on rickety buses to get there – only to find that the tourist hotel had closed, the National Park was closed, and the last bus back had departed. Nonetheless, it is an attractive place to visit with a restored 15th century Portuguese Fort raided by Sir Francis Drake on one of his slave trading voyages. It is a small gentrified fort, rather than a defensive fort. And all around are abandoned statues, memorials set up by the Portuguese colonists to the 15th century explorers.

I left the next day on the locals’ ferry, essentially a large motorised canoe. Though the boat threatened to sink at various points, the voyage afforded good views of the plentiful bird life and mangrove swamps; the wildlife, particularly the birdlife, is second to none.

I returned from West Africa having had a memorable experience. Visiting the slave-related sites illustrated the many-faceted story of the international trade in humans – and the subsequent movement towards ending this inhumane trade, some 200 years ago.