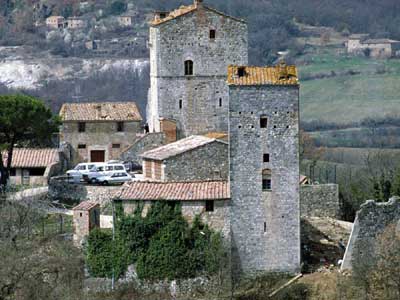 West of Siena, after the straggling village of Rosia, the main road for Massa Marittima and the coast passes through a twisting gorge. This tract of road connects the centre of Tuscany to its western reaches. On exiting the gorge, proud on a bluff to the right lies Montarrenti. It is a quintessential hilltop village, though, in this case, only one inhabitant remains: Quinto, a man who owns lean hunting dogs, fluffy rabbits and countless chickens.

Quinto was, in fact, the only resident when, in September 1981, we first slogged up the dusty track through the concentric circles of ruined fortifications to the two elegant towers separated by the stump of a third. In his thick Tuscan brogue he willingly linked arms with my companionable colleague, Riccardo Francovich, and led us up.

First we went to the greater of the two towers – a palace on the west side, worthy of any Sienese grandee; then up the lesser tower, a slender one-period Romanesque building of exquisite proportions. Following this, we slid down the scree of age-old refuse below the towers – sending boulders, rusty tins and fragments of 19th century chamber pots tumbling downwards. Below, occupying the girth of the hill, was a ring of well-made peasant 13th century houses – each the size of a manor house in England at the time. The canopy of tall trees lent a forbidding spirit to this forgotten place. But the effervescent Riccardo was thrilled. With the diminutive, bright-eyed Quinto by his side, he was in his element.

Six seasons of excavations transformed Montarrenti. First, a great fence was erected to contain 12 deer – a cost-effective method of maintaining the vegetation. Then, there were the digs: an area of the hilltop was stripped down to the bare rock, as were three dwellings below. Colossal rock-piles were shifted to reveal the long history of a village that at first we assumed had been occupied in the later 10th century – the age of incastellamento (village building). Riccardo, however, increasingly questioned his own assumptions and during the fourth season in September 1985, the dwelling (Area 2000) on the lower girth had been excavated to its earliest period. Structurally it was quite unlike the later, familiar house made with ashlar and containing a ground floor stable (the kind of dwelling to be seen all over Tuscany today). What we had found instead was a building cut into the natural rock with a few associated post-holes to take the uprights that supported a simple thatched roof. Indeed, excluding any thought of the later houses on this spot, the earliest was a sunken hut like the sunken huts known from Anglo-Saxon England or indeed much of the North Sea littoral.

With the irrepressible belief in the adventure that marked Riccardo as an extraordinary archaeologist, he charged me to obtain carbon 14 dates for other comparably early levels at Montarrenti. Faint-heartedly I did as instructed, and sure enough, the results confirmed Riccardo’s hunch – we were uncovering the beginnings of a village that ante-dated the 10th century. Indeed, as we were to later show, its origins lay in the 6th or 7th centuries.

Never one to hold back, Riccardo organized an international conference in 1988 to challenge the very historians who had established the ideas that actually led us to Montarrenti! The incomparable gastronomic hospitality of Siena drew our unsuspecting colleagues to an encounter where Riccardo, with a characteristic mix of humour and scientific gravitas, challenged the accepted history of village formation in Italy. In practise, this involved an unforgettable verbal jousting match with the then senior professor of medieval history in the Sorbonne, Paris – Pierre Toubert. A rotund and austerely thoughtful man, who expressed himself in razorlike sentences, Toubert found the bombast from my Tuscan colleague mildly amusing but unacceptable. His archaeologists, he reminded the star-struck ensemble, had also found post-holes but these belonged to primitive dwellings that confirmed his magnus opus on the subject. His archaeologists, we noted, nodded dutifully, as their master poured cold water on the challenging discoveries of Montarrenti. The unmoveable simply could not be moved. Riccardo, needless to say, was not to be intimidated by this great authority and his francophone grandiloquence, and so began a new era! We will show you, he genially ventured. After that meeting, Riccardo’s pupils excavated more than a dozen hilltops like Montarrenti over the following 20 years. By the mid 1990s Toubert gracefully conceded that his hypothesis needed drastic reconsideration.

This chapter in Italian history was uppermost in my mind as I paid my annual visit to Marco Valenti’s extraordinary excavations at Miranduolo (in the locality of Chiusdino) in chestnut woods, ten miles west of Montarrenti close to the brick-built Cistercian abbey of San Galgano. I had often come to this unsuspecting archaeological haven with Riccardo. This time I was alone as my great friend had, to my immense sorrow, died in an accident in March. One of his students drove us up the one-in-three incline to the dig deep in the thick woods. Beyond, in a clearing bathed in radiant sunlight, lay seven years of exposed remains.

Marco tells a compelling story about this anonymous woodland. Miranduolo was little more than a rocky knoll when the first sunken huts were built on it. It is hard to imagine, yet this gaggle of buildings, as at Montarrenti, became the core of a community which grew and prospered in different guises over the following six to seven hundred years. Strip away the hill and the gently swaying chestnuts, and the village resembled West Stow (the now reconstructed village in Suffolk excavated in the 1960s) in size and shape. Riccardo’s bombastic conviction that Montarrenti grew up like the Anglo-Saxon villages he had read so much about is now plain to see on the rocky terrain at Miranduolo. Like Montarrenti, the little community was transformed in the 9th century when a manor house supplanted one sunken building and, more to the point, established its importance by excavating an extraordinary ditch to separate itself from the other dwellings. Alongside the manor, silos were excavated in the rock to store grain, huge quantities of which, mostly burnt for storage purposes, have been found.

The manor now became the epicentre of the place. In the 10th century it was enclosed by a major, if simply made, wall, then it was acquired in the age of incastellamento, so the written sources affirm, by the powerful Gherardeschi family who controlled much of western Tuscany. Their impact is plain to see: a massive palatial tower replaced the manor house, dwarfing the cluster of dwellings beyond the ditch. Such conspicuous architectural authority soon attracted dissenters in the form of the neighbouring Bishop of Volterra who between 1125-33 laid siege to the palace and, as numerous arrowheads attest, brought about its partial destruction. The Gerardeschi refurbished parts of their tower, but clearly they had lost faith in Miranduolo and eventually sold the property in 1257-58 to local counts, the Cantoni of Montieri. Evidently, the new family were not impressed and, as new farmhouses were constructed on the fertile plains around the region, so Miranduolo was abandoned.

Marco’s vivid story – much of which can be read online as the diggers report through a blog during the season and is brilliantly depicted in site panels aimed at Tuscany’s burgeoning numbers of walkers- is made all the more compelling by the netherworld atmosphere of this secreted, sylvan spot. Unlike Montarrenti, there is no Quinto through whom one might forge a link to the past. However, here lies the chance to unearth much of the long sequence found in our dig down the road. More importantly, the genesis of this settlement – from cluster of huts, to a manor, then a palace – is evocatively clear and beyond doubt. This village long pre-dated the first 10th century charters that Pierre Toubert described as the process of incastellamento. Indeed, as Marco says with the enthusiasm and passion of his teacher, this place grew out of the last Roman villages and was peopled by peasants for their families. Here, then, as at Montarrenti, began the making of medieval Tuscany.

As we left the hilltop, I recalled to Marco – a youthful veteran of Montarrenti – how I had not really believed Riccardo, as he danced with delight on the sides of the first hut (in Area 2000) we found in 1985, when he cheerfully claimed that this would change history. The excavators, I recalled, looked at him and beamed, not sure if he was brilliant or mad, utterly infected by his glorious passion. How he had been emphatically proved right! Marco smiled knowingly at my recollections. We agreed that at Montarrenti, and now at Miranduolo, what really fired Riccardo’s imagination was that he was meeting the last, and now aged, generation of hilltop villagers – in the benign form of Quinto with his hunting dogs. Through him and the simple remains, Riccardo had felt some connection back to a time when the Roman landscape was abandoned in favour of the seemingly timeless one that he had grown up in.

Riccardo Francovich died on 30 March 2007 in a fall at Fiesole.