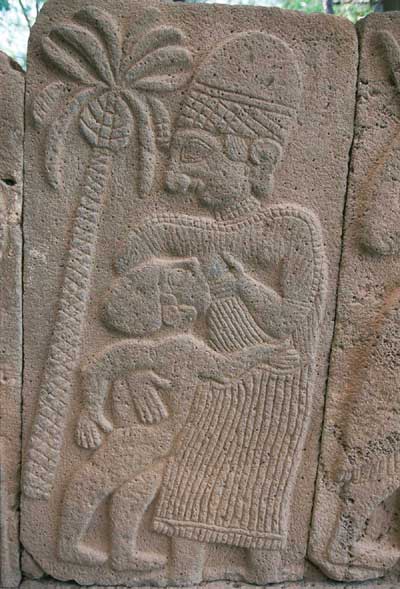 Current World Archaeology Editor was invited on a tour of the Southeastern corner of Turkey. While there, she visited sites including Karatepe, the impressive Neo-Hittite capital, and Dara Anastasioupolis, a wonderful 5th century AD city. However, for this month’s Diary she focuses on Göbekli Tepe, a site so incredible that it is rewriting the course of human history.

I am always jealous of archaeologists who work in Turkey. Forget toiling away to find one bit of burnt charcoal (an Italian experience of mine) or a dozen chips of wizened flint (England this time), in the Cradle of Civilization, the archaeologists always seem to turn up sites that change the face of human history. Such is the case at Göbekli Tepe, one of the world’s most important archaeological sites.

Göbekli Tepe – or ‘Belly Mound’ – is an early Neolithic site, lying atop a windswept hill 35 miles north of the Syrian border. For the past 15 years, the German Archaeological Institute and Turkish colleagues have been digging there.

To date, they have revealed four circular or oval structures, though geophysical surveys suggest many more structures still remain buried within the hill’s belly. The ovals measure between 10m and 30m in diameter, and date to around 9100-8000 BC. Some of the ovals still contain monolithic pillars, up to 5m high and weighing approximately 10 tons each. The pillars are hewn in dramatic T-shapes, decorated with animal reliefs, including lions, bills, snakes, birds, and other abstract designs. The floors are made of burnt lime, and a small low bench follows the base of the unworked dry stone walls.

The presence of such old buildings at a time when people were still hunting and gathering (‘Belly Mound’ offers no traces of domesticated plants or animals, nor any domestic remains) has effectively eaten up and spat out previous interpretations about the origins of settlement. Traditionally, scholars assumed that people began to grow crops, and having invested in the land, only then built permanent structures. The evidence from this site suggests that here, at least, the reverse happened: buildings first, agriculture second.

Indeed, Professor Klaus Schmidt, the site director wonders whether the site played a critical role in the transition from hunting to agriculture. Was the necessary social organisation required to build the temples linked to the organised exploitation of wild crops? The archaeologists estimate that up to 500 people would have been needed to extract the pillars, so wild cereals must have been used more intensively, possibly leading to deliberate cultivation.

But why build shrines here? It seems that this spot, high in the hills and overlooking the plains, appears to have been on a productive migration trail of game. The shrines were perhaps built as territorial markers, or perhaps to bring good fortune to the hunt, or for a range of other reasons. After about 8000 BC it seems that the site was abandoned and purposely covered over with soil – perhaps because the animals changed their migration trail; or perhaps, as Schmidt suggests, ‘with the so-called Neolithic revolution and the invention of crop agriculture, the religious world of the hunters became worthless and the site was abandoned’.

I was shown the site by archaeologist Dr Bahattin Celik who excavated at Göbekli Tepe in the 1990s. Interestingly, his current work at Sanliurfa, some 15km southwest of the temple site, is adding yet more pieces to this jigsaw.

Sanliurfa is a still-thriving city with such deep roots that it is said to be the birthplace of Abraham in the Quranic texts. Here, Celik has recently found evidence for the oldest crops in the world. These he has found from beneath a crumbling portion of the city wall; they date to 9600 cal BC. How might this also rewrite human history? How might this evidence further challenge ideas of early human settlement, social development, and economy? It was extraordinary to be taken to this unassuming wall by Celik, which I happened to pass the previous evening en route to a local kebab restaurant, only to realise that it might hold the secrets to modern civilization.