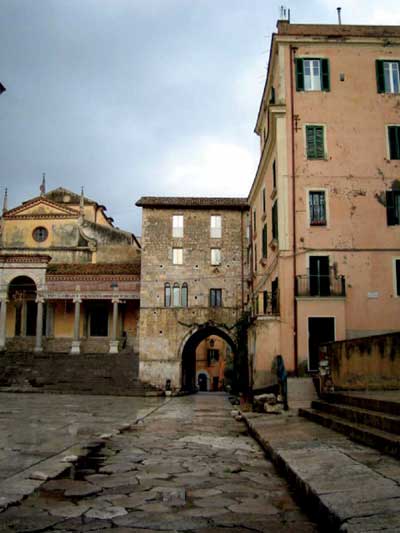 Italy is gearing up for elections in April, so the government, to make a point, has trimmed 13% or so off its 2006 budget for culture. The papers are full of polemics about the situation. Ticket prices into monuments will rise and more museums will be shut due to staff shortages. The highly bureaucratic system of archaeological superintendencies, responsible for Italy’s monuments, is now under notice that things must change. But is it changing on the ground, beyond the great honeypot centres? Over New Year I made a foray south of Rome to visit a constellation of sites that can be easily reached by train in an hour from either Rome or Naples.

Terracina lies on the Appia overlooking a natural harbour. Like Gaeta, 20 miles to the south, it is a point of embarkation for the idyllic island of Ponza. Terracina, though, is well worth a visit. The ancient city occupied a narrow spine above the bay, dominated by a high cliff above. On the cliff is the huge temple dedicated to Jupiter, a seamark for shipping passing between Rome and Naples. Only the foundations of the temple survive, but its platform commands an incomparable panorama of central Latium. The Roman town below seems lost in the jumble of Medieval and Baroque buildings but few towns in Italy have such an unalloyed sense of the past. The Roman forum, lying alongside the Via Appia, is still the main square. Its pavement is more or less intact. Even the bronze letters commemorating the refurbishment of the forum by Aulus Aemilius remain, in some cases, firmly embedded in the forum’s paving slabs. Just north of the forum lies the capitolium, facing a huge temple that today serves as the foundations for the High Medieval cathedral. A few scattered excavations here and there reinforce the sense of antiquity, but apart from the little civic museum overlooking the forum, the hand of modern heritage tourism has barely touched this place. Its serenity and history are alluring. Seemingly out of sight of the national debate about culture, this place is a secret joy.

At the far end of the sweeping bay beyond Terracina lies the seaside resort of Sperlonga. Spelunca, according to the Roman chronicler, Suetonius, was the favoured palace of the Emperor Tiberius (AD 14-37). Here, while banqueting in a cave, a sudden collapse of rocks crushed many servants though the emperor survived. Tacitus, writing a little later, embellishes the story, telling of how a prefect of the praetorian guard threw himself over Tiberius to protect him. The celebrated cave was found fifty years ago, a yawning hole at the far end of Sperlonga beach. Rising on tiers beyond it, lay a great palace. Excavations in the cave produced thousands of fragments of sculpture including a group depicting Scylla attacking Ullyses’s ship. This magnificent piece originally stood on a plinth in the pool in the cave, close to the platform on which the Emperor dined. The national delight in discovering these sculptures made it inevitable that they would be transferred to Rome, but the locals protested so vigorously that a handsome museum was made and, in the words of a proud custodian, it is open seven days a week from 8.30am until 7.30pm! The present ill-winds in Rome seem not to have reached this spot.

The cave itself is separated from the rolling surf by a grim fence and has a down-at-heel feel. Yet fish still lazily glide through the waters around the platform where Tiberius dined and debated the affairs of state.

Gaeta lies a few miles further south. Once a great Medieval port, it is best known in antiquity as the site of Cicero’s seaside villa – where in 44 BC the legendary man of letters was assassinated, being decapitated. Further south, though, is Minturno, ancient Minturnae, a wealthy port at the mouth of the Liri river. The remains are immense: a fine theatre overlooking acres of fora, a macellum and a host of other buildings, all blisteringly scrubbed clean of vegetation. In this case, though, the local historical group have stumped up funds to furnish the bare monuments with interpretative panels and reconstruction drawings. Given the complexity of the puzzle of walls, the signs are helpful, and especially so as the Soprintendenza has no guide books on sale (these can be found in a local hotel). However, the hand of Rome is boldly manifested beside the ticket office where a sign says in several languages that under a law of 1999 it is forbidden to take photographs for professional or unprofessional (!) purposes. Minturno, it seems, is subject to the whacky government wish to copyright monuments, hoping this will become a money-spinner. In the twilight no-one seemed to care about my camera, or perhaps they thought the law was an ass too!

Another hour south, leaving the region of Latium and entering Campania, the past and present worlds change completely. At Baia, on the northernmost horn of Naples’s vast sweeping harbour, Roman ruins occupy the water’s edge for miles down as far as Pozzuoli, islands of broken monuments in amongst the grim suburban outer-reach of Naples. The main museum lies in the huge Aragonese castle dominating the highest promontory hereabouts. It has a bookshop with numerous versions of guidebooks in various languages that affirm the once towering status of the Imperial palaces here. The gallery, given over to the reconstruction of a nymphaeum found in an underwater excavation, is an unexpected treat. The life-size bronze equestrian statue of Nerva, his face stitched on to an earlier bust of Domitian, is a peerless work of Roman art. Safe in these galleries, armed with vivid accounts of the age published by the local Soprintendenza, this is a blissful oasis. But deep down beside Pozzuoli’s harbour, the huge macellum merits the kind of graceful attention that makes Terracina, Sperlonga and Minturno timeless places. Instead, the press of modern urbanism and half-completed conservation with the inevitable dank water occupying the site, leaves one asking how on earth can Italy really deal with its past when its present is so uncomfortably pressing for reform.

Italy is at its best where small towns like Terracina, Sperlonga and Formia take control of their past and where the ablest conservators are placed at the service of restoring statues such as the Scylla attacking the prow of Ulysses’s ship and the ‘damnatio’ depicting the face-transplanted Nerva. As the swingeing cuts bite culture in Italy, it is high time to promote those approaches to the past that have made this country a traveller’s paradise and to axe nonsensical laws such as the copyrighting of monuments. Get the balance right, and with vision places like Pozzuoli, so special in antiquity, might prosper again.