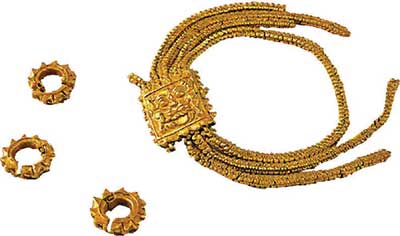 As a schoolboy in the mid 1960s, I was privileged to have lived in Singapore for over two and a half years. Since then I have revisited the island as a tourist on several occasions. For much of this time I swallowed the conventional line that Singapore had no significant history before Raffles came to the island in 1819.

However, visits to the local museums – the Singapore History Museum and Asian Civilisations Museum – and more particularly the National Heritage Board’s bookshop divested me of this opinion. Documentary sources, chance finds, the most notable being gold body adornments found on Fort Canning Hill in 1926, and more latterly archaeological investigations, indicate that significant remains of 14th century date are present on the island.

Indeed, significant remains were evident to the early colonists. In 1822/23 the island’s second Resident, the eloquent John Crawfurd, walked around the settlement’s wall and described its extent: ‘The wall, which is about 16 feet in breadth at its base, and at present about 8 or 9 feet in height, runs very near a mile from the sea coast’ to the hill now known as Fort Canning Hill. On the hill, important remains were also evident. These were apparently built of ‘baked brick’, sandstone or timber. Crawfurd also observed that ‘Among the ruins are found various descriptions of pottery, some of which is Chinese, and some native. Fragments of this are in great abundance’.

Nothing of these considerable remains is visible above ground today, and this is the very point. Singapore not only has archaeology, it contains significant buried remains but most of which are within the modern business district. These are extremely vulnerable to the rampant developments currently taking place within this vibrant and commercially important district.

It was with this in mind that, on my most recent visit to Singapore in February 2004, I determined to learn more of the island’s buried heritage and the resources in place to protect them, or to record them before their destruction. To this end I made contact with the eminence grise of Singapore archaeology, Professor John Miksic, and several of his assistants and post-graduate students.

Having grown up within the relative wealth of Unit-based archaeology, and then worked in contract-based archaeology in England since the mid 1970s, I can only surmise that the situation in Singapore is similar to that in England at the end of the 1960s: a dedicated group of professional and amateur enthusiasts retrieving what they can with scant resources.

For the record, the first dig took place in 1984, on Fort Canning Hill where Crawfurd had observed important remains 160 years earlier. This work was done under the aegis of the National Museum and was sponsored by Royal Dutch Shell Petroleum. Together with the discovery of some rich artefacts, including the aforementioned gold items, this work confirmed the presence of 14th-century occupation. Subsequent investigation on the hill and close to the line of the 1819 shoreline has proved the presence of other remains of this date.

Indeed during my visit this February I was able to witness excavations within the grounds of the Anglican cathedral, which was originally located close to the shoreline but is now some distance from it. There the archaeology is dated to the 14th century and later. However the holes tended to be on the small side, usually 2m x 1m, and largely excavated by local school pupils, university students, and ex-pats under the supervision of Professor Miksic or his assistants. They operate on shoestring budgets largely provided on a project by project basis by generous donations from commercial and private donors. Recording of the deposits is rudimentary and ‘sophisticated’ equipment, such as a dumpy level, is lacking. It should be noted however that the National Parks Board furnishes space for a simple archaeological lab free of charge. It is here that much of the processing, analysis and storage takes place.

You may ask, ‘What is the statutory protection offered by the Government and what is their commitment to the protection or record of the remains?’. The answer is ‘Very little’. Singapore has no laws mandating assessment of impact of construction on archaeological resources. The Government does not employ any archaeologists. Despite this, there is a level of tokenism by the Government, possibly for external consumption. For instance the Preservation of Monuments Board states as one of its objectives: ‘To preserve for the benefit of the nation monuments of historic, traditional, archaeological, architectural or artistic interests.’ But, to my mind, there is very little evidence for this either in situ or by record.

More positively, perhaps one should take account that archaeological remains have been noted, and wherever possible, rescue excavations take place. The results are usually published despite the lack of funds, (archaeologists in the UK take note!). A permanent outdoor display in Fort Canning Park even incorporates an actual excavation site with strata dating back to 1300 AD on view. The remains are accompanied by excellent boards explaining the significance of the remains, and some artefacts are displayed in situ while others are in cases in a building adjacent to the display.

Finally, the Singapore History Museum is planning an expanded gallery on pre-colonial Singapore, to open in 2006. This will further reinforce the message: Singapore is significantly older than two centuries and fits into the wider mercantile and settlement patterns of the 14th century and later.

Nonetheless, major problems confront Singapore archaeology, notably a lack of permanent official institutional status; a lack of regular funding; few professionally trained archaeologists, and a serious shortage of space for storage and analysis. The biggest problem of all may be that if these situations are not urgently addressed then very little of the demonstrable buried archaeological resource will be recorded or left in situ beyond a few years time. For, such is the consequence of the pace of redevelopment in the commercial district, which coincidentally, was also the very core of the 14th century settlement.