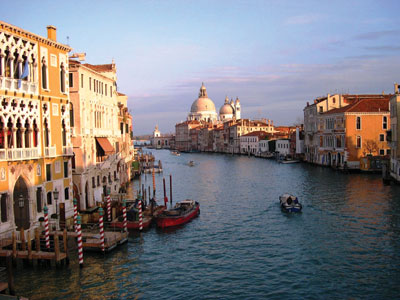 Modern Italy has its problems, but it also has truly exceptional assets. Its new high-speed trains rate pretty highly on any list of new resources, while of those from the past, Venice – it goes without saying – is truly fuori dal mondo: out of this world. From Rome to Venice on the frecciarossa – the high-speed express – takes just three and a half hours. Leave the Colosseum at lunchtime, and dine in the shadow of the Rialto Bridge. It is amazing: leaving a world of carelessly racing cars and taxis for vaporettos, after a leisurely afternoon trip traversing mountains and plains.

Of course, the Venetians resist the idea of being compatriots of the Romans: theirs are mentalities separated by millennia of differences. But while the origin of the Roman Empire is now pretty much charted by numerous excavations on the Palatine Hill, the beginnings of the Venetian Empire remain sketchier. The power and wealth of Serenissima, as the Venetian Empire became known, is utterly apparent as the vaporetto chugs down the Grand Canal. Each palace, one after the other, provides a monumental reminder of the Empire’s reach from the head of the Adriatic Sea to the Levant and, of course, in the case of Marco Polo, to China. From the 12th century until the humbling Peace of Campo Formio of 1797, this was, in many respects, the epicentre of the world. Yet on any misty or wet day, let alone when the city is inundated by acqua alta and residents and visitors alike wade everywhere, the question as to why an Empire put down its roots here of all places – a laguna morta (dead lagoon) – comes often to mind.

The barest skeletal history about the origins of Venice is well known. Dredgers have long since contended that Roman buildings of substance occupied parts of this maritime coastline before a seismic sea-level change occurred in the later 4th or early 5th centuries.

As it happens, this hydrological upheaval was when, traditional sources claim, the Veneti fled the scourge of the Huns on the mainland, seeking refuge in the new swamps. From this watery fastness, these islanders eventually established an umbilical relationship with the eastern Roman Empire when Rome declined and as north Italy fell to the Lombards.

Protected by the seaways, Cassiodorus tells us, they were premier saltwater fishermen, but, judging from their archaeology, they were also minor entrepreneurs managing commerce at the head of the Adriatic Sea. Fast-forward two centuries, and this drew the enmity of Charlemagne who, having conquered much of peninsular Italy, failed to take the lagoon. In AD 812 – two years before his death after a long, action-packed life – he finally reached a treaty with Venice, giving him a priceless foothold on the Adriatic. At long last the Carolingians of Charlemagne’s Germany could vie with the Byzantine merchants of Constantinople.

The treaty, however, cut two ways. With support from the Germans, Venice essentially established a sea-power that, as it happened, long outlasted Charlemagne’s Empire. Following the formula of the day, possessing a cult gave a place status; so, chancing their luck against Arabic traders, a leonine band of Venetian merchants in 828 stole the bones of St Mark the Evangelist from Alexandria, making these the centrepiece of their new community. Venice, as we now know it, was taking shape.

Sauro Gelichi and his team from Ca’ Foscari University, Venice, have mapped the barest footprint of the earliest Venetians. St Mark’s Square today would have been on the south side of a nucleus that had as its centre – the civitas at Rivoalto – modern Rialto. Today there is nothing to be seen, of course. A smaller nucleus lay close to S Pietro at Castello, a mile east of Rialto. This was the bishopric of Olivolo. Excavations here in the 1980s produced a substantial building mounted on wooden piles, as well as 6th-century pottery and three 7th-century Byzantine seals. Diagnostic 9th- to 10th-century ceramics, however, were absent.

But what did Venice in Charlemagne’s time look like? It is hugely tempting to interpret the contemporary textual descriptions of these island communities, great self-publicists, as already palazzo-occupying mariners enjoying an extravagant standard of life. For sure they were already working glass on islands like Murano, where the great basilica and its tower have fragments of Lombard church furniture embedded into its later fabric. The Carolingians and their successors fetishised this glass, and traded it on to Viking communities around the Baltic Sea. To find out – or at least to give myself a sense of these first Venetians – I took the opportunity to visit a small salvage excavation on one of the emblematic islands of the archipelago: Torcello.

Torcello offers the most promising illustration of Venice at its birth. The little island lies beyond Burano, necessitating an hour or so on a vaporetto. Begin at Fondamente Nuove, where mourners gather to cross to the cemetery, and take the line that pauses at Murano and then heads out to Burano. It is really a bus service on water. But one with a difference: the horizon is mesmerising. The waterways meld into the distance where, illuminated on this particular day, the far mountains, the Dolomites, glisten magically, sheathed in snow.

To reach Torcello it is necessary to change at Burano, where a diminutive vaporetto plies the five-minute crossing twice an hour. Santa Maria Assunta – Torcello’s cathedral – dominates the journey. Its campanile is a fingerpost for mariners, while the massive body of its basilica overbearingly dominates the flat marshland.

Like all places without motor vehicles, there is a heartening serenity about Torcello. Birds singing in the rushes alongside the canal leading to the church are about as noisy as it gets. Downtown Torcello consists of a tiny museum, the great church, and its erstwhile martyrium.

Torcello superseded the major Roman town of Altinum on the mainland as a bishop’s seat in Late Antiquity. In 638, the relics of St Heliodorus, a 4th-century local, were brought here, giving purchase to the construction of S Maria Assunta. The building was restored in 864, and then again in 1008. But the church is justly renowned for its majestic mosaics of the 13th century dedicated to the Last Judgement. Appropriately Mediterranean rather than Italian, the mosaicists worked to the artistic standards of the greater Byzantine commonwealth, although the poise of the many figures appears livelier than most contemporary Greek frescoes and paintings. The baroque wealth of detail conveyed by these unnamed masters is simply extraordinary.

S Maria Assunta once had a baptistery, which has now disappeared, and a martyrium dedicated to Santa Fosca. This small, pleasing church remains dwarfed by the cathedral today. Facing the churches is a modest 14th-century palazzo, now housing the Museo Provinciale of Torcello, where finds from the excavations are held. The palace is all that remains of an èmporion méga that, according to the Byzantine Emperor Constantine Porphyrogenitus, was 10,000 strong in the 10th century, and later boasted 12 parishes and 16 monasteries. Producing salt was once the island’s talisman.

Torcello holds a special place in Italian Medieval archaeology. Here, the father of the discipline, Gian Piero Bognetti, invited the Polish town archaeologist Withold Hensel to collaborate on stratigraphic excavations to trace Torcello’s urban origins. Excavations were made in 1961-1962 – before Bognetti died – beside the cathedral, where remains of an early Roman earthwork were found well below 7th-century levels, and covered in turn by a well-preserved 9th-century glass kiln fortuitously associated with a Carolingian penny and an Arab silver dirham. The kiln was almost certainly employed to make the windows and lamps for the 9th-century restored church.

In search of Venetian origins

I had come to see more modest new excavations. Two of these were on the green that separates the basilica from the canal on its north side. The archaeologist, Diego Calaon, told me that a plan had been hatched, amazingly, to build private buildings on this precious ground. As a result the Regione – the regional administration – wanted to know whether archaeological deposits might be put at risk. They certainly would be!