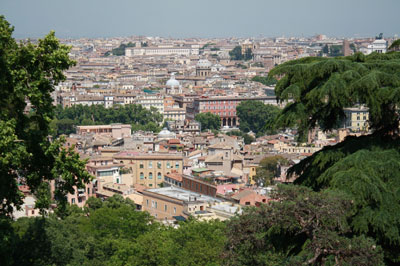 All roads seem to lead to Rome. I once lived here for seven years and now, by way of another capital, Philadelphia, I am back. What is the attraction? Well, few places are steeped in so much history – ancient, Medieval, and modern. Few places, too, mix such energy with history. Forget the problems of the Euro, the sovereign debt, Berlusconi’s bizarre antics, and the summer heat, this is without doubt the Eternal City. Its streets and parks along with its monuments hold an infinite fascination. Add to this the simple pleasure of its outdoor trattorias and cafes, and the strutting gaiety of its opulently dressed citizens, and it has to be the most perfectly confected city in the world.

I have returned to take the helm of the American University of Rome, an endearingly personal college with the blessed privilege to teach to US-accredited standards, located on the Gianiculum (or Janiculum) Hill. The hill takes its name from an ancient sanctuary to Janus. High above Rome’s founding seven hills, it is apparent from the Tiber banks below as well as on it that this is a special place. From here, close to the San Pancrazio Gate, the city is spread out like a great model below.

Bathed by ever-changing light and breezes off the Tyrrhenian Sea, some ten miles away, this has to be one of the most magical locations for a university in the world. Indeed, a New York Times reviewer of Robert Hughes’s recent book about Rome began: ‘If we could be reborn wherever we chose, how crowded Rome would be, populated by souls who had spent their previous lives longing to inhabit a villa on the Janiculum Hill’ (Francine Prose, 2 December 2011).

The pleasures of the Gianiculum are not new to me. I actually took a small part in a dig a stone’s throw from the American University of Rome, in the street outside the American Academy. In 1990, an opportune service trench made in the Via Medici prompted the Mellon professor at the Academy to visit the British School at Rome one Sunday night and ask for help to excavate the following day. My trusty band of excavators, staffing the British School’s post-excavation projects, was more than happy to don digging togs and clean up and record the deep trench.

As they did, American fellows and professors gazed down, somewhat amazed as the brick-built alignment of the Aqua Traiana became clear to all and, beside it, the simple installation for one of the many Roman-period watermills that lay along its line. The barest settings, coins, and potsherds showed that this was a 3rd-century undershot mill that had been abandoned by the 5th century AD, a century before the Goths allegedly cut the water-supply, thereby forcing the Emperor Justinian’s general, Belisarius, to transfer other such mills from the Gianiculum to floating mills on the Tiber.

On this sunny spring day, my most cherished memory is of Lucas Cozza, an archaeologist of Rome who had the grace and venerable topographic knowledge of an Enlightenment abbot, sketching intently. As I approached him, he smiled knowingly, drawing from his pocket a crisp photostat of a drawing made by Rodolfo Lanciani, Rome’s greatest archaeologist and a good friend of Lucas’s father. Made on the 2 March 1886, it showed pretty clearly that Lanciani had recorded much the same section of the aqueduct with its mills while he was preparing his masterwork, the Forma Urbis Romae.

Roman record
It was Lanciani’s published legacy that led me to my other excavation experience in Rome. Rodolfo Lanciani seldom excavated; he concentrated on recording Roman remains unearthed in the massive construction projects as Rome was made once more into a capital city following the unification of Italy.

But outside the Porta Pia, on the north side of the city, he made some important excavations in the Villa Patizi, which he published in exceptional detail for the time. Now, as it happened, the British Embassy lies in a gloriously secluded small park just inside the Porta Pia, a great gate refashioned by Michelangelo in 1564.

Opinion is divided about the brutal modernist style of Sir Basil Spence’s British Embassy, but before it was erected in 1963 the British School carried out some small-scale excavations. Perched on concrete piers, the new charmless chancery building had deliberately avoided penetrating the ground below and destroying any Roman remains. As the holes for the piers were excavated, the only discoveries were pozzolana mines, tunnels from which precious stone was mined in the most inhumanely nerve-wracking conditions.

In 1991, the British Council proposed to construct a building in the gardens, so the British School was invited to ensure that nothing of archaeological importance would be damaged. The embassy was not thrilled by this prospect. Sympathetic as they were to any excavations, apart from cohabiting with the British Council as a result of Foreign Office ‘cuts’, there was also a new menace to consider.

That very winter, to the astonishment of the embassy staff, a group of Albanians, who had recently taken their rusting freighters to Apulia, escaped Italian internment and climbed over the razor wire into the embassy, whereupon they claimed political asylum. Security was the issue. So, the Council hired us a security guard who spent one month gazing at six archaeologists spending their Christmas vacation digging as deep and as fast as they could.

No one could fault our efforts! The upshot pleased the Council no end. We made a kind of history: our team excavated within the walls of Rome and found… nothing! I exaggerate slightly. We discovered a splendid rubbish mound full of good 3rd-century pottery and knick-knacks, and we were able to show that this had been a garden of sorts at the apogee of the ancient metropolis, occupying a bucolic angle just inside the Aurelianic walls. But hard on the heels of the Albanians, our diligence in the absence of the anticipated mosaics and statuary plainly baffled the ambassador and his staff. After all, such treasures had existed in spectacular amounts in Lanciani’s dig a mere stone’s throw to the north.