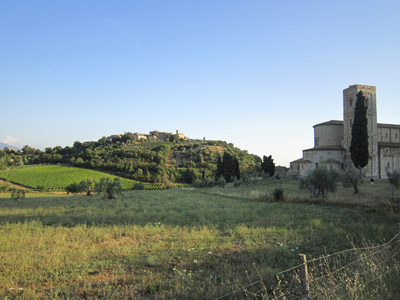 A gentler, more verdant part of Italy is difficult to imagine. The river Asso is little more than a brook bisecting southern Tuscany before it runs into the deeper Orcia valley and winds its way towards the Tyrrhenian Sea. This is heavenly country, blissfully serene, and awash with vineyards that produce Brunello, a prince of red wines.

There is also an Olympian quality: Mount Amiata rises to 1,700m and commands both valleys and much more besides. This extinct volcano forms the backdrop to the huge panoramas that stretch south from Siena, encompassing quintessential hill towns like Montalcino. The age-old eastwest axis, however, is misleading. One of the world’s greatest highways sweeps through this countryside, passing over the rolling Siennese hills southwards, crossing the Asso, and then the Orcia by means of a huge Republican-period bridge. Its eventual destination, 200km to the south, is the eternal city, Rome. This was the Via Cassia, a Roman road that connected north-west Europe to Rome. It was re-invented, with only minor modifications, from the later 9th century onwards as the Via Francigena, the Franks’ route. Armies of pilgrims came down this highway including, in AD 990, Sigeric, the Archbishop of Canterbury, whose journey is recorded in Lonely Planet detail.

Sacred tourism of the early and high Middle Ages was to forge the route of choice for Grand Tourists in early modern times, intrigued by the ruins of Rome. Only with the post-war establishment of the A1 motorway from Milan to Rome via Florence did this great road lose its international appeal as a thoroughfare. Nevertheless, new pilgrims now follow the tracts of the Cassia running from Siena to a little south of the Orcia crossing. These are the well-healed vacationers from all over the world, drawn to an unforgettably exquisite landscape, to its cheeses and wines, and to the architecture of towns like Buonconvento and Pienza. In abbeys like Sant’Antimo, when the monks chant vespers, it seems closer to the unreal world of Hollywood than to the challenging difficulties of a credit-crunched 2010.