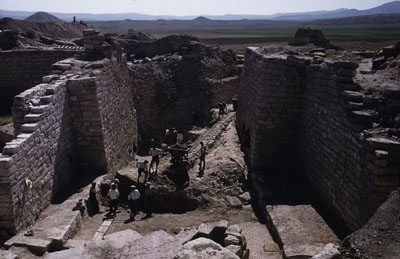 Last summer, one day stands out above all others: my first trip to Gordion (ancient Gordium), a Turkish city associated with Midas, and the golden touch of a Penn professor, Rodney Young. From all I had heard, I assumed it would be arid and charmless. But archaeologists are the very worst travel-guides. Seldom, if ever, do they prepare one for the spirit of a place, let alone its defining beauty. Instead, they recall the long months of hardship and the heat.

So let me begin by saying that Gordion is extraordinarily and unexpectedly beautiful. Little over one hour by car west of Ankara, you descend a ridge of rolling hills and sweep down towards the site, conscious of a great expansive plain reaching perhaps a 100km into the distance. Only faint traces of villages shaded by thin strands of trees tucked away on low promontories punctuate this mesmerizing panorama. This is a big landscape, befitting a lost city with an epic history. Wheeling effortlessly above these grasslands were storks, their magnesium-white wings shimmering in the morning sunshine as they lumbered higher and higher in search of pockets of air.

Gordion is, today, the village of Yassihöyük, 10km from the burgeoning city of Polatli. Apart from its museum, Yassihöyük has a shabby little bar, and appears, like so many Turkish villages, emptied of its citizens, who have migrated to the cities where there are schools and convenient shopping malls.

But Gordion has a great history – hard to imagine of a place where the only distraction, now, is the sound of sheep-bells. Much of this, of course, centred upon the ancient town, a huge mound a mile beyond the village. But, the mound is only half the archaeological story. Gordion’s cemetery of more than 100 earthen tumuli, including the colossal mound MM (Midas Mound), is itself a city of Phrygian dead.

Gordion was the home of Midas, a legendary figure in world history. A Phrygian king, our first account of Midas comes from the records of his Assyrian neighbour, Sargon between 717 and 709 BC. Midas, it seems, posed a threat to Sargon, who sent diplomats, and then an invading force to Phrygia. No war, apparently, ensued. According to the Greek and Roman sources, Midas possessed immense wealth. The legend of his golden touch has its origins in a poem by the Spartan, Tyrtaeos. Each era was especially fascinated by Midas’s death in about 695. Ovid believed that he committed suicide by drinking bull’s blood; Plutarch says his suicide was the result of nightmares; and Strabo associated it with the Cimmerian invasion of Phrygia.

Gordion undoubtedly flourished under the Phrygians, but this location also attracted major successor towns. A Hellenistic town followed Alexander the Great’s triumphal sweep across Anatolia. It was Alexander in 333 BC, according to tradition, who cut (or otherwise unfastened) the celebrated Gordion knot. This intricate knot joined the yoke to the pole of a Phrygian wagon on the acropolis of the city. Associated with origins of the Phrygian dynasty, it was prophesied that whoever cut the knot was destined to rule Asia. The Hellenistic town continued to thrive, even after the Celts arrived in the early 3rd century BC. By 189 BC, though, the town was apparently abandoned when the Roman general Manlius Vulso marched here at the request of the kingdom of Pergamon.

Refounded in the early 1st century AD as the short-lived Roman colony of Vindia or Vinda, the town crops up on the Roman itineraries. There were also smaller Later Roman, Selςuk, and even Ottoman villages on the site of Gordion. By 1900, when German archaeologists Gustav and Alfred Körte arrived in search of Midas, a village called Bebi occupied the main mound. Bebi disappeared dramatically in 1921 when the Greek invasion of Anatolia was halted here and on the hills above, in the Battle of Sakarya, which brought the victorious Turkish general Kemal Ataturk to power. The present village of Yassihöyük, then, is the last vestige of a community with roots that, on and off, extend back to Midas, and before to the origins of the Phrygian dynasty.