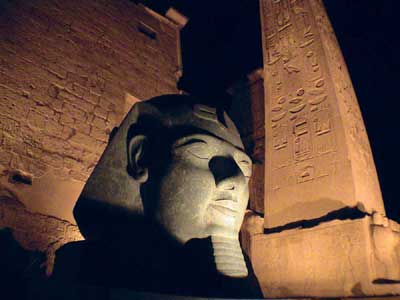 Egyptologist Lucia Gahlin is a trustee of the EES. In addition to teaching and researching, Lucia leads tours to Egypt. Here she takes us to one of her favourite sites: the great temple of Luxor.

Luxor Temple is one of Egypt’s truly magnificent ancient monuments. It is located in southern Egypt, in the heart of modern Luxor – some 6km southeast of the Valley of the Kings. Its architecture is stunning: in addition to a mighty sphinx-lined avenue, and colossal statues of Ramesses II, it contains majestic colonnades of monumental sandstone columns and vast walls up to 20m high, all gloriously decorated with highly detailed reliefs.

The temple that you see today dates mainly to the reigns of two of the greatest builders of the New Kingdom – Amenhotep III (c.1390-c.1352 BC) and Ramesses II (c.1279-c.1213 BC). Yet it has an extraordinary continuity as a place of worship that continues into the modern era. Thus, in the northeastern corner of the site, stands a mosque partly built of pharaonic inscribed blocks, and itself built upon a Christian basilica. Each August, worshippers arrive at the mosque for the festival of the Muslim Saint Abu el-Haggag, after whom the mosque is named. Fascinatingly, these modern celebrations have certain parallels with the annual pharaonic festival of Amen held here over 3,000 years ago – when Luxor Temple was dedicated to Amen, the principle deity of the New Kingdom, a mysterious god linked with ideas of creation and transcendence.

Give us an insider secret?

When you are standing in the stunning open court of Amenhotep III (c.1390-c.1352 BC), look up at the lintels high above you. Stare hard enough and you might be able to make out bare patches of sandstone inside the royal cartouches. The name of the god Amen, forming part of the king’s name, has been erased. This was the work of Amenhotep’s son, the ‘heretic’ king Akhenaten (c.1352-c.1336 BC). For, in his attempt at something approaching monotheism, Akhenaten regarded only the sun-god Aten as the one true god. Thus, he went to great lengths to erase the name of the god Amen (to whom the temple was dedicated) – including from the sacred cartouches of his own father.

What one place, above all others, should readers seek out?

When visiting the temple, do seek out the carved scene of the façade of the temple itself. This relief is hidden away and easily missed, tucked behind a pillar on the north wall of the first court, close to the northeast corner. It provides a unique opportunity to see how the temple would have looked with its original statues, obelisks and flag staves intact.

…And what one place should be avoided?

I like everything about Luxor Temple! But perhaps avoid visiting between June and August when it is too hot to go exploring temples. Then again, this means missing the vibrant festival of Abu el-Haggag…

Which museum do you recommend?

You absolutely must visit the Luxor Museum, just a 15-minute walk north along the corniche. There you will find a number of the extraordinary, perfectly preserved statues found beneath the floor of the eastern side of Amenhotep III’s open court during restoration work in 1989. The highlight for me is the stunning quartzite statue of Amenhotep III, represented in a solar manifestation.

What work is underway at the site?

Excavations between Luxor and Karnak temples are exposing the avenue of human and ram headed sphinxesthat lined the processional way between the two temples.

In my dreams, it would be wonderful to unite the two temples once again, were this not at the expense of the homes and facilities of the local people. A recent Egyptian-American project has also undertaken the vital job of lowering the area’s groundwater level. Before this initiative, the damp was becoming all too apparent in the temple, and, if left unabated, the effects would have been disastrous.

What is your lasting memory of Luxor Temple?

The glory of the temple at night: it stays open until 9pm and I strongly recommend a visit in the dark, when it is so beautifully lit. Many of the scenes become much clearer than in daylight. An evening visit really is a magical experience.