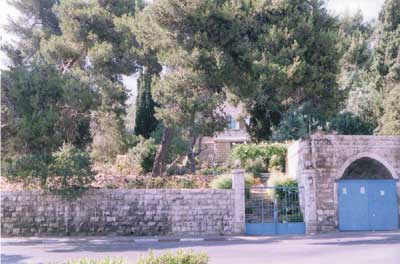 Jerusalem is a hotspot, not least archaeologically, and the region has been intensely explored by travellers and archaeologists.

During the last century archaeological work has been carried out with the permission of successive, or sometimes parallel, government departments, Ottoman, British Mandate, Israeli, Jordanian and Palestine administrations. Under these administrations, French, Italian, British, American, German, Spanish and other foreign institutions and scholars have made tremendous contributions to the archaeological record – the study of the Palaeolithic and Mesolithic of Mt Carmel, and contributing to the recovery of the Dead Sea Scrolls being two of the most remarkable – but all institutions today suffer increasingly from financial problems as well as the political pressures.

Some of the foreign institutions, mostly British, have faced or are facing closure. The Israel Antiquities Authority has enormous commitments to the developer-led rescue archaeology, with huge backlogs of publication and ever growing warehousing problems. University-led research projects with student input continue, but the paying-volunteer work force from abroad is inevitably affected by political events. Major Israeli archaeological research projects have been going forward at Megiddo and Hazor, and there is huge input at the major tourist sites, such as Acre and Beth Shean, but the Palestinian Department of Archaeology struggles to survive, and its joint projects with the French, British and Swedish expeditions in the Gaza strip have been curtailed or postponed. Particularly interesting and important discoveries have been made at the ancient port of Anthedon (Blakhiyah).

The Kenyon Institute
The British School of Archaeology in Jerusalem, founded in 1919 and re-established in Jerusalem by Kathleen Kenyon in 1952/3, was merged with the British Institute at Amman in 1999 as the Council for British Research in the Levant. The CBRL is still an educational charity, with members who continue to use the library and hostel as an invaluable research base for an increasingly wide range of subjects under the humanities umbrella; but maintaining building and library will require considerable fund-raising. This year, as a memorial to Kathleen Kenyon, CBRL’s Jerusalem regional office has been renamed the Kenyon Institute. The new name celebrates not just Kenyon’s success in re-establishing an institution which has played a role in training generations of students (many were, or are, currently in post in British universities), but also the fine projects she directed at Jericho and Jerusalem and the impact they had on Near Eastern archaeology in the 1950s and 1960s.

Although some may regret the loss of the old name, the Kenyon Institute contributes to the broadening scope of research by the CBRL under the aegis of the British Academy. Research is no longer purely archaeological, or archaeology related, but recent archaeological activities which have been supported include: the recording of the medieval core of a Palestinian village; work on the publication of the BSAJ/Tel Aviv University excavations at Iron Age, Byzantine and medieval Tel Jezreel; the publication of the first volume of the Medieval and Ottoman survey of medieval Muslim buildings in Palestine; the Leverhulme Trust and a generous donor have supported the ongoing publication of Kenyon’s Jerusalem excavations. In addition there are current projects on language, identity, cultural and heritage issues. Research and publication (of newsletter, journal and monographs) remains a priority, but political events have had considerable impact on field projects.