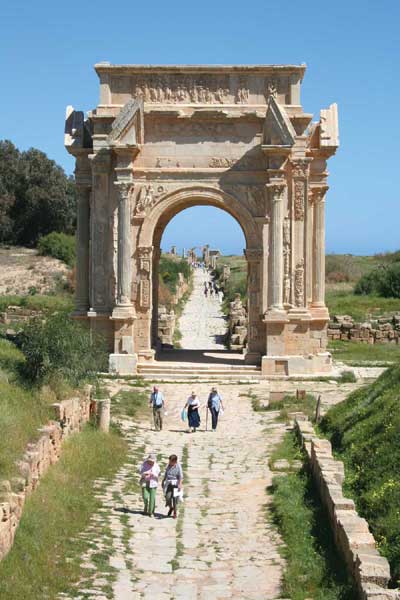 Archaeologist Philip Kenrick undertook his 1970s doctoral research at Benghazi, Libya’s ‘second city’. Since then, he has worked on many other sites in Libya, the Middle East and Europe. He is currently working on a series of guidebooks to the archaeology of Libya. The first of which, on Tripolitania, will be published in spring 2009. Here Philip takes us to the Libyan gem of Lepcis Magna.

This UNESCO World Heritage Site is one of the world’s most striking Roman cities. It stunned Mortimer Wheeler and John Ward-Perkins when they first saw the Italian excavations with the Eighth Army in 1943, and it has captivated visitors ever since. At the end of the 2nd century AD, a native of Lepcis, Lucius Septimius Severus, became Emperor at Rome, and lavished on his home town a development scheme to match the very best in Rome itself. Because of its state of preservation (and the restorations carried out by the Italians), one can walk through the Severan Forum, the basilica and the streets of the city and get a real feel for imperial grandeur. It even has a well-preserved port with quays, warehouses, mooring-rings and a lighthouse!

There are so many wonderful monuments that you should see; apart from the imposing colonnades of the Severan Forum buildings, do visit the stunning amphitheatre, carved out of a hollow created by a quarry so that you reach it from the top and it suddenly opens out below you!

…And what should readers avoid at the site?

Avoid spending too little time there or you will be very frustrated: a day and a half is the absolute minimum.

Give us an insider secret about Lepcis.

Because of the state of preservation, one can see in detail how the great Severan complex was built. Many of its columns were of green cipollino marble from Carystos on the Greek island of Euboea, while others were of pink granite from Aswan in Egypt. All of these were shipped to the site roughed out and cut to length. The Greek masons were pretty good at this, but the Egyptian columns vary in length by up to 25cm.

So what were the Lepcis builders to do? If you look closely at the nave colonnades of the Severan Basilica, you will see that the capitals and bases of the columns (of Pentelic marble from near Athens) were carved on site, and that their proportions had to be stretched or squeezed to make up the difference! It is also clear that the whole project ran grossly behind schedule: it was formally inaugurated in 216, five years after the death of Septimius, and over budget (…so what’s new?).

As a result, much of the detail was never actually finished. Look again at the nave colonnades in the basilica, this time at the bases on the north-east side. So desperate were they to put an end to the job that some of the bases are only roughed out, without the mouldings being rounded or polished at all, while others are finished on precisely half the circumference – just the more obvious side towards the nave!

What do you think might still be hidden at Lepcis?

Part of the magic of Lepcis is to walk down the streets that have been excavated, between banks 2m high or more, and to see façades of houses and other buildings that still lie untouched beneath the sand. This was a wealthy city, and apart from the public buildings, which have been extensively explored, there must also have been some pretty wealthy residences.

Which museum can readers visit to see more of the finds?

The statuary, mosaics, pottery and other finds from this site are so prolific that they are spread around at least four different museums. The best pieces are in the National Museum in Tripoli, but the museum at Lepcis itself also has a very fine display, in addition to which it is mostly well labelled in English.

What is your lasting personal memory of the site?

In 1995 I was fortunate to be part of a British team excavating a modest house near the theatre. The superficial levels showed that it had been abandoned and buried by the sand in the 5th century AD. As we cleared the courtyard, we came across an opening into an underground cistern, with a cover-slab over it. When the slab was removed, the cistern was found to be about 10m deep and not to have been filled with soil. It was possible to climb down into it, using the footholds provided for cleaning it out when it was first built. On the walls at the bottom we could make out muddy hand-prints from whoever last went down to clean it – not less than 1,500 years earlier!

British Airways flies daily from Heathrow; there are also direct services from major European airports. There is no self-drive hire in Libya.

Independent travel to Libya is currently not possible since it is necessary to have an invitation from within the country in order to obtain a visa and all groups of four or more must be accompanied by a member of the Tourist Police. This is normally arranged by a tour operator, who can also organise a ‘tailor-made’ tour through an agency, either in Libya, or in the UK.

If you would like to visit Libya with Philip Kenrick, he will be leading a tour there on 5-14 March 2009. This will include Lepcis Magna, Cyrene, Sabratha plus the lesser known gems of the former Greek port of Apollonia and the Pentapolis city of Ptolemais. It is organised by ACE Study Tours, 01223 835055, www.acestudytours.co.uk priced £1790pp including return flights, full board, excursions and admissions.