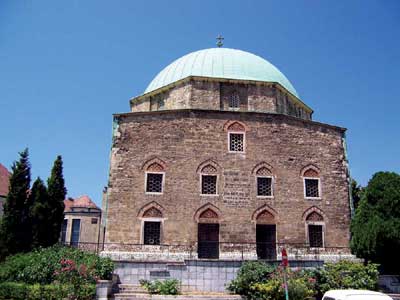 The plane descended into a wintry Magyar gloom with a cloud base at zero. At Ferihegy airport a people-carrier awaited, not though to transport us, like most visitors, into the beckoning bright lights of Budapest. Instead we were going south, to Pécs, a three and a half hour journey along route 6, a contender for the longest and busiest country lane in Europe. I was in Hungary along with Valerie Wilson, a colleague from English Heritage, to attend a meeting of the APPEAR Project. This is a piece of European Commission research with one of those acronyms that even George Smiley could not crack – APPEAR stands for ‘Accessibility Projects, sustainable Preservation and Enhancement of urban subsoil Archaeological Remains.’ In plain English this means we are looking at excavated archaeological sites in towns; drawing up guidelines to advise when and how best to display them to the public.

The idea for the project came from Liege, in Belgium, where there have been particular problems with the massive excavations of the cathedral, a building which was demolished in a fit of French Revolutionary zeal. Now in a spirit of fraternité the E.U. is bringing together Belgians, French, British, Spanish, Italians and Hungarians including archaeologists, economists and architects to delve into the good, the bad, the ugly and occasionally the downright marvellous doings in historic towns – from London to Rome, Barcelona, Madrid, Zaragossa and Perigueux.

Our Hungarian partners had suggested that we should meet in Pécs. This seemed a good idea until we saw route 6. On the outskirts of Budapest most of the bright lights seemed to be car-dealers. Since the market economy opened in 1990, and Hungary joined the EU in 2004, the country has clearly been invaded by international capitalists and a transport policy which must delight all those Fiat, Volvo, Opel, Alfa, Suzuki, Toyota and VW concessions whose familiar logos glowed through the fog. And judging from the number of cars on the road, all ten million Hungarians must have bought into the auto-culture. On the edge of Budapest one set of lights eclipsed all others – it was the Tesco mothership, glowing out of the darkness of the Danube valley.

But as Scarlet O’Hara said ‘tomorrow is another day’ and I awoke in Pécs (pronounced ‘Paych’). Transport may be a problem (the train is no faster than the road) but it is worth the effort. The proverb says ‘Dem Deutschen Bécs, dem Ungarn Pécs’ – the Germans have Vienna, the Hungarians have Pécs and the comparison is not unreasonable. Pécs was Sopianae to the Romans, Fünfkirchen – the Five Churches in German. The city, tucked into the foothills of the Messek range, has a Mediterranean micro-climate, sheltered from the north, mild in winter but cooled by summer breezes.

Lying on a major north-south and east-west confluence, Pécs has been a target for about every invader with trans-European ambitions. It is obvious in the main square, surrounded by superb late renaissance and enlightenment buildings but dominated by a mosque. Following the defeat at Mohacs in 1526 (one of the decisive European battles) Hungary was overrun by the Ottoman armies of Suleiman the Magnificent. Ottoman rule lasted about a century and a half, and today a cross emerges from the dome of the mosque. Just across the road is evidence of the latest cultural invasion – a McDonalds. One commentator said ‘the best thing about McDonalds is that they have brought decent public lavatories – especially women’s – to the ex-Soviet countries.’ The thing I noticed about Hungary’s loos is that the basins were all stamped ‘Alfoldi,’ the name of a distinguished tribe of classical historians, and also the name of Hungary’s Great Plain – the western end of the Eurasian steppe. Because of their origins among the nomads of western Siberia, Hungarians speak a debatably Finno-Ugric language, which sounds so different to those of us accustomed to Indo-European. And as a result Hungarian children now start their English classes at the age of six. At eleven they choose a second foreign language. Local people told me that German and Spanish are the most popular choices. English though is increasingly the lingua franca and spoken remarkably well around the restaurants, bars and shops of Pécs, considering that there are relatively few visitors who are natural English speakers.

Our hosts speak and translate into French. The APPEAR project meets for two days in the Pécs Academy of Sciences, a remarkable wedding cake of a building decorated with a Pécs speciality, ceramics and tiles burgeoning with three-dimensional glazed fruit, snake-like tendrils and devilish satyrs.

After two days my ear is attuned to French spoken in at least half a dozen accents. But we do have a culture clash. It is unusual for an EU research project to be conducted in French so Valerie Wilson – with a little help from me – is translating the main document into English. The French is about as ornate as the room we are sitting in. Our plain English translation reduces the size of the documents by about a third – and gives the impression to our Continental colleagues that we Anglos are a bit unsophisticated – ok, even thick!

Day 3: we have paid our dues and get to explore Pécs. It is a crisp brilliantly sunny day and the city looks fabulous. We walk around the city walls into the cathedral quarter, the focal point of the Pécs World Heritage site, where large-scale archaeological excavations are being undertaken in advance of the construction of a new visitor centre and archaeological park. Dr Zoltan Bachman, the architect, talks us through the project. Dr Bachman is a laconic character with a droopy Hungarian moustache and a dry sense of humour. This comes out in his eyes as much as his Hungarian-translated-into-French. The Hungarians burst out laughing when he tells us ‘Communism was inefficient but at least I knew whose bum to lick. The problem in Europe is I don’t know whose bum to lick’ (my translation toned down from the original). Their problem is that the EU has agreed a 6 million euro grant but so far no money has arrived. Local businesses and the Council are bankrolling the project until Brussels sends a cheque.

Local archaeologist Oliver Gabor guides us through the excavations, which immediately expose the incredible complexity of Pécs’ history. The first trench is a slice across the mint of the medieval bishopric and ramparts burnt by Turkish and Mongol attackers. Through these layers emerge the roofs and foundation of late Roman Christian mausolea – the monument which really put Pécs on the world archaeological map. The archaeologists are exposing the remains to preserve and display them. ‘The EU regulations are presenting us with some difficulties’ Oliver says, ‘The only way we can put in ramps for wheelchair access is to slice through some of the archaeological remains.’ Nevertheless the exposed archaeology is spectacular and the best still awaits beneath the yard of the Cathedral close.

Roman Pécs, or Sopianae, developed from the 2nd century AD, expanding from a village into a urban centre at an important crossroads of the imperial road system. By the end of the 3rd century Sopianae was the administrative centre of the Valeria Province, one of the four sub-provinces of Pannonia. Outside the city, to the north was an industrial area of kilns and quarries. By the 4th century this lunar landscape had been taken over as an early Christian burial ground. The first burial chamber was discovered in the early 18th century and in 1782 the remarkable Saint Peter and Saint Paul mausoleum re-appeared. In the late 19th century there was a building boom in Pécs which revealed many more remains and led, in the 20th century, to more systematic research and campaigns to protect Pécs’ heritage which culminated in the 2000 declaration of World Heritage site status.

Lying at a Eurasian crossroads, Pécs has traditionally been a meeting place of peoples and ideas. Inevitably, as Christianity spread into the area, Pannonia was stimulated by a queue of locals seeking martyrdom and eternal life. In the post-Constantine period the wealthy Christians of Pécs displayed their belief in the afterlife in more concrete form. The St Peter and St Paul burial chamber was a two storey building. Above ground the memoria was a gathering place for family, feasting and prayers. Below ground and entered through a separate door was the room of the dead dominated by images of Saint Peter and Saint Paul flanking the Chi-Rho symbol of Christ. Tendrils of vines and ivy festoon the painted walls and ceiling. I have never seen another place which so demonstrates the early Christian hope for eternal life in paradise and the presence of Christ. Other walls show biblical scenes, Adam and Eve, and Noah crouched in the ark which is no more than a wooden box. No room here for the animals two by two.

On the western wall the Virgin Mary appears wearing the garments of a Roman matron but the infant Jesus’ image has largely decayed. Nearby in the so-called early Christian Mausoleum Daniel stands sturdily between two recumbent lions and Adam and Eve step out of the frame of the fresco which surrounds them, leaving the garden behind while modestly clamping large leaves over their private parts. Next to the Catacombs Pécs is probably the most evocative early Christian site we have, though culturally it has closer links with Christian Thessaloniki than Rome.

To cap our visit the archaeologist found a great stone sarcophagus as a service trench was cut through the cathedral yard. At eight o’clock next morning we were on-site for the resurrection, along with a small horde of cameramen. The stone lid came off to reveal a skeleton and a fine glass vessel. We had minutes to spare before the taxi arrived for the long drive back to Budapest airport. ‘Tell people about Pécs’ said the hotel manager as he waved us goodbye. I promised I would.