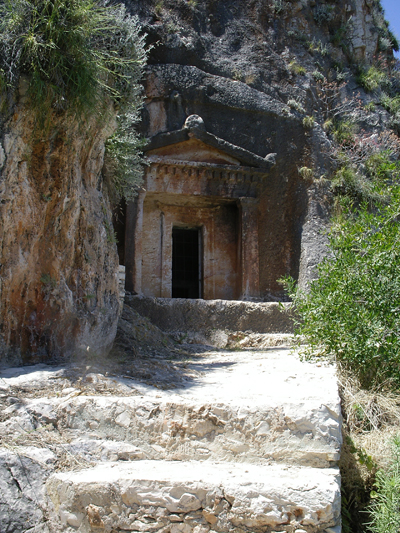 Crete is well-connected by ferry to a number of the islands that lie close by. So if you want to go somewhere really off the beaten track, here are a few suggestions: be prepared for very simple accommodation and a chance of adventure, however.

If you take the Piraeus ferry north from Kisamos at the western end of Crete, the first stop before Kythera will be the tiny island of Antikythera, home to only 40 permanent residents. The island is famous mostly for the finding of a 1st century BC shipwreck, which yielded the magnificent bronze Ephebe of Antikythera, and the curious and ingenious Hellenistic astronomical computer known as the Antikythera Mechanism – both artefacts are now in the Athens Archaeological Museum. On the headland to the east of the tiny port, you will find the extensive remains of a largely unexplored Hellenistic city – ancient Aegila – with the remains of walls, bastions, cisterns, and an impressive boat-ramp. Even better, you will be guaranteed to have the place all to yourself.

Heading north, this time from Heraklion to Piraeus by ferry, your first stop will probably be Santorini – one of the most important and fascinating islands, archaeologically speaking, of all the Cyclades. But, this time, do not linger: instead, change ferries and head for the nearby island of Anaphi. Most of your fellow passengers will be locals – or maybe goats. In sight of Santorini, Anaphi is wild, treeless and home to a remarkably well-preserved sanctuary of Apollo that dates back to a visit to the island by Jason and his fellow Argonauts. They were caught in a terrible storm – according to Apollonius of Rhodes – and as they prayed to Apollo to save them from destruction, the god appeared in a flash of lightning, revealing to them the haven of the island. A monastery with nine monks now occupies the ancient temple, the naos of which once functioned as their refectory. The great platform of the temple and much of its inner structure still stand to a considerable height, constructed from magnificent 4th century BC masonry, with an abundance of carved inscriptions on the lintels and door posts. Elsewhere on this wild island, you can find carved sarcophagi and other remains just lying in the open fields.

If, instead, you head east for Rhodes by ferry from Ag Nikolaos at the eastern end of Crete, your first stops will be the islands of Kasos and Karpathos. Karpathos is wild, mountainous and little visited by tourists, but rich in archaeological interest. At Arkaseia on the west coast, there are beautiful Early Christian floor-mosaics beside the water on the beach, but perhaps the most exciting and least disturbed sites are at the rugged northern extremity of the island: they are best visited on a private excursion arranged by one of the local agents in the port of Diafani. They will take you by boat, through the tidal race in the narrows between Karpathos and adjacent Saria, to the remote site of ancient Brykous (now called ‘Vrykounda’). Vrykounda can only otherwise be reached by a long, mountainous hike from the village of Olympos. Ringed by high mountains, this dramatic site has one of the most majestic settings in the Aegean. The remains, too, are plentiful – walls, a fortress, a necropolis with decorated tombs and, in the tip of the promontory, a large subterranean grotto where Hermes and the Nymphs were once celebrated. The same boat will take you to the uninhabited islet of Saria, off the northern tip of Karpathos. On Saria there are ancient remains and the base of a large Early Christian basilica. However, the island’s most unusual sight is its numerous ‘bee-hive domed’ buildings, structures that are almost unique to this remote fastness in the sea. Their design is so redolent of Persian and SelÁuk architectural forms that it is possible they were built by Saracen settlers, or by refugees from even further east. On Saria, the utter peace is disturbed only by the deafening sound of bees, and the smell of the herbs on which they feast is all around you.

From Karpathos, the ferry route continues to its ultimate terminus: beyond Rhodes, beyond the boundaries of the Aegean Sea, the tiny and forgotten islet of Kastellorizo is tucked under the southern Turkish coast, 80 nautical miles to the east. This is the last splinter of Greek territory – a beautiful island with a gracious harbour of neoclassical architecture. It may seem remote today, but in Antiquity this island was a vital stopping point on the maritime route from Rhodes to the Egyptian port of Alexandria. On the central plateau of the island is the interesting acropolis of ancient Megiste, its walls and gates still standing. In the fields below are the remains of countless wine-pressing installations from the Hellenistic era, with decantation tanks carved out of the solid rock. Still further down, by the shore, is a fine Lycian pedimented mausoleum. It looks towards the Turkish coast less than a mile away, inviting you to extend your voyage into another whole realm of archaeological interest.