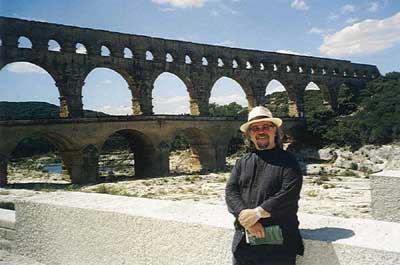 If I were putting forward a candidate for ‘Wonders of the Modern World’ there is no doubt where my vote would go – to the Millau Viaduct. This is the beautifully ethereal structure that spans the Gorges du Tarn, the most impressive Anglo-French collaboration since Concorde and the Channel Tunnel.

Shortly after the Millau Viaduct opened in late 2004 I drove to it with my wife from our house, nearby, in the Cevennes. We hoped to reach the viaduct at dawn. For an hour we twisted and turned through the gloomy fog and dripping pines. The prospect of a spectacular arrival at Millau seemed unlikely – until just a few minutes before we got there.

As we crossed the Larzac Plateau from the south, the fog cleared. The road turned to reveal before us, like a grand stage-set, the viaduct itself, floating miraculously above the mist over the River Tarn, the rising sun reflecting on the sheer limestone buttresses of the valley walls. Sir Norman Foster, the British architect of the viaduct said ‘I wanted to create the impression of flying in a car.’ He certainly has. This is the nearest a human can get to soaring like one of the famous local vultures – without clinging to a hang-glider.

Foster is quite a hero in the South of France, first coming to prominence there with his Carré d’Art in Nîmes, the mediathèque and art gallery facing the Maison Carrée, which is arguably the finest preserved of all the Roman temples. His sleek modernist temple opened to great acclaim in 1993, shortly after Foster started on another project in the area, the Musée de Préhistoire des Gorges du Verdon. This is a large building, but one which is wedged discreetly into the hillside, using the local limestone of the nearby spectacular cliffs.

The French, unlike the British, seem comfortable with modern design in sensitive, historic sites. Witness the Louvre’s bold glass Pyramid and compare it with the weakly compromised extension at London’s National Gallery. The one a modernist reference to Napoleon’s Egyptian expeditions, the other a post-modernist piece of anachronistic flim-flam.

Yet France, unlike Britain and Germany, was not, historically, a major player in the rush to industrialisation and modernisation. Instead France, like its rugby team today, produced the occasional brilliant success: Marc Seguin who invented the suspension bridge or Eiffel whose magnificent Viaduc le Garabit can be seen about an hour’s drive north of Millau.

The French also have a respect for engineers which the British seem to have lost since the great days of Telford and Brunel. And the grandes écoles still produce world-class engineers such as those who made Foster’s design a reality.

France’s genius is reflected in the style with which it adopts modern technologies and the boldness of its town planning – from Haussman’s Paris to Nantes, Lyons, Marseille and most recently Montpellier and Nîmes. So when the French élite get it wrong they do it big time. Witness the grim low-rent housing blocks (the HLM or habitation à loyer modéré) which blighted the suburbs of most cities, and villages in the 1950s and ’60s. The riots which recently flared through the French suburbs are, in part, a legacy of this techno-arrogance.

Yet as early as 1962, the Malraux Law recognised the value of local styles and traditions. National and regional parks blossomed and French city dwellers clamoured to restore second homes in the country, even before the current invasion of rosbifs. The 1960s started a trend, continuing today, for the French intellectuals and professionals, to return to the countryside, to re-plant their roots in le terroir.

But while Millau embraces its spectacularly modern viaduct, it was also here that José Bové’s anti-globalisation shock-troops sacked the local McDonald’s (though there is now an even larger branch on the outskirts of town.)

Bové is one variety of modern Frenchman. He has the face furniture of a peasant – a moustache worthy of Vercingetorix, but is armed with a degree in philosophy: a real soixante-huitist. These hills are full of ageing hippies who sought refuge from Paris, Lyons or Marseille, to rear goats, make cheese and honey or grow rare varieties of organic potatoes. Gallia Comata – the long-haired Gaul described by Catullus – is alive and well, fuelled by the internet.

It is something of a cliché to claim that modernists overthrew the past in their search for technical solutions. Some certainly forgot their own past yet their high priest, Le Corbusier, was impressed at school by prehistoric Swiss Lake villages, with their slim pillars and decking, and as a young man spent many hours sketching and absorbing the traditional houses of Istanbul.

In the same tradition, in the South of France, Foster has shown a brilliant ability to integrate modernist structures with historic towns – and landscapes. In Nîmes he has provided a cultural temple, sunk deeply into the ground, so that it both references and respects its surroundings. There is a genuine conversation between the solid, dark, secretive Maison Carrée and his light, elegant, transparent building. Similarly you can hardly experience the Millau Viaduct without thinking about the Pont du Gard: both are glamourously bold and beautiful solutions to practical problems of how to carry water, or people in cars, across a deep valley and a frequently torrential river.

If you do find yourself hurtling down France’s A75 towards the Millau Viaduct, my advice is to take a diversion into Millau itself. Millau is an attractive town, with excellent Roquefort cheese shops, and a great museum. For any archaeological anoraks who, like me, enjoyed a mis-spent youth counting Roman pottery sherds Millau is home to the holy grail – actually thousands of them: those shiny red Samian ware pots from the home of this pottery style: La Graufesenque.

Moving about a kilometre south of Millau, are the excavated remains of La Graufesenque itself. This was the Gallo-Roman Black Country where about five hundred potters laboured to fill the maws of kilns that could take up to thirty thousand vessels at a time. Classical historians have a habit of playing down the scale of Roman industry. This place shows how massive it could be.

Industry has come and gone in this part of France. The southern part of the Massif Central is today mainly occupied by the Cevennes National Park, France’s largest, established in 1970 and home to beaver, wood-grouse, raptors, and blessedly few human beings. Most of them left in the late 19th century when the silk industry and the silver, lead, zinc iron and coal mines, which had brought prosperity in the previous century, all went into decline.

The Cevennes is a spectacular landscape of granite and schist, bounded by the great limestone massifs of the Causses. Its people are a delightfully independent bunch that remind me of the non-conformists of the Pennine valleys of England. Their ancestors were Cathars, the heretic ‘pure ones’ of the 12th century who believed that God reigns over a spiritual world of beauty and light.

Their descendants have a historical affinity for the Millau Viaduct. Simon de Montfort and then King Louis IX of France, who was canonised for his pains, led genocidal crusades against these people. Three centuries later the glove-makers of Millau were in the forefront of the Protestant revolution. After the Revocation of the Edict of Nantes (which allowed for freedom of worship) in 1685, half a million Protestants left France. In the Cevennes the local Hugenots, the Camisards (from ‘camiso’ or ‘shirt’ in the Langue d’Oc) resisted the French Catholic authorities until the Edict of Tolerance was passed in 1787.

In the following years, especially during the decades of prosperity, Protestant churches or temples in a classical style, appeared in the villages and small towns of the Cevennes. As in Britain’s non-conformist areas, rugby is popular in Occitane France. Even Rugby League is played, known as ‘heretics rugby’ or ‘the Cathar sport’.

Today the rugged landscape is mainly forested and farming is in decline. Recently I visited the curator of a little local museum in the next valley north of where I live. She showed me lots of photographs taken in the late 19th century. The hill slopes were bare and covered in agricultural terraces. Terraces are completely commonplace in the hills around the Mediterranean, and largely ignored by local historians and archaeologists, though there is evidence that such systems can be as old as the Neolithic or Bronze Age. The 18th century was their hey-day in the Cevennes when the mining and silk producing population prospered and farmers laboured mightily to create new fertile strips on the rocky slopes. Today most have disappeared into the forest, as the trees reclaimed the slopes.

According to local histories severe floods occurred about two or three times per century. There have been eight in the past ten years, thanks to increasingly violent storms. The record is a downpour of 980 mm in 48 hours in the nearby village of Vallerague. This creates mini-tsunamis up to 20m high along the rivers such as the Gard, which the architects of the Pont du Gard have successfully weathered for two millennia. Not far from our home in the Cevennes, our local medieval bridge was not so lucky: in September 2004 it was battered down, mainly thanks to those pile-driving acacias. Not surprisingly when the National Park carried out a survey asking French People ‘what do you associate with the Cevennes?’ most answered ‘Le Meteo – the weather.’

Global warming could turn the Millau Bridge into a monument of the auto-age. And we can always revert to the Mesolithic. Like all good modernists I’m looking forward to going back to the future.