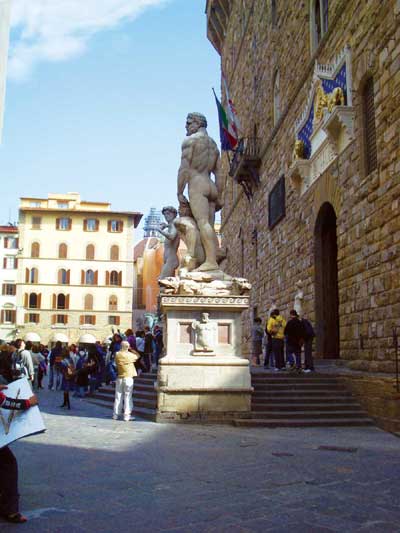 No city is more European than Florence. Like Paris, its very name summons up a sense of being sophisticated and, above all, synomous with culture. After all, the city of Michelangelo’s David also boasts Europe’s only European university. No wonder, then, the city is full of Americans, Britons and Japanese feasting on the great architecture of Brunelleschi and the trendiest shops that line the streets leading to the Palazzo Vecchio and the Uffizi gallery. Florence was the first foreign city I visited as a schoolboy. Today I am back because I read an article in The Guardian: ‘Medieval finds block new exit from Uffizi’ (24.2.05). At first I thought the article was a spoof. Apparently, the great architect Arata Isozaki’s projected new entrance to the Uffizi had been stopped, so Italy’s Minister of Culture, Giuliano Urbani let it be known in a published letter to Florence’s mayor, because excavations here in the Via de’ Castellani revealed Medieval remains which could not be damaged by the new building. The accompanying picture, however, showed not the Medieval remains but Isozaki’s entrance, called ‘La Pensilina’ – a high elevated shelter, but generally nicknamed the ‘bedframe’.

Deft investigation has revealed that The Guardian completely missed a world scoop. First of all, Isozaki’s ‘Pensilina’ proposed for the east side of the Uffizi is, to loosely quote Prince Charles, a carbuncle. Heaven only knows how Isozaki won the international competition in 1998 for the entrance, but he did. Beating off the likes of Lord Foster (of wobbly bridge fame), he came up with such a singularly unimaginative design that you can just hear the present minister cogitating with his officials as to how it might be stopped. You can all but hear the Rome-based mandarin declaiming with delight at the solution: ‘Got it, the medieval archaeology!’ Closer inspection, however, shows that the archaeology in the so-called Via de’ Castellani lies to one side of the proposed entrance and, as I shall explain, fascinating though it is, cannot be preserved and presented because the most important discoveries are ancient alluvial deposits left after the Arno flooded!

Contrary to what one might expect, extraordinarily little is known about the archaeology of Florence. Excavations by a combination of antiquarians, the Soprintendenza and art historians have provided a sketchy framework. But huge excavations such as those in the Piazza della Signoria and, more amazingly, of the well-preserved Augustan theatre under the Palazzo Vecchio have never been published. The picture, then, is of an important Republican Roman town that in Hadrianic times spread out to the marshy area alongside the river Arno. The Via de’ Castellani excavations in front of the Uffizi and within the adjacent Biblioteca Magliabechiana are the first systematic scientific investigations ever. Made with support from the Department of Medieval Archaeology at Sienna University, the sequence is quite fascinating.

First, it is clear that the riverside area was sparsely occupied up until the later 7th century AD – much later than anyone had previously imagined. Of special importance are the rich deposits with East Mediterranean tablewares, amphorae made nearby at Empoli and soapstone jars from the Alps. These levels are covered by a thick layer of black earth, now dated by C14 to between AD 680 and the later 12th century. The earliest medieval buildings probably belong to the 13th century when a line of dwellings lay off a small piazza. The cellars were evidently deepened in the 15th century when vaults were inserted. Hereabouts, judging from the numerous wasters, was a major pottery kiln during the 13th century. Then, the cellars were inundated, possibly on several occasions, by numerous alluvial deposits, which clearly overlie the floors, causing their abandonment before the mid to later 16th century when Giorgio Vasari began the celebrated project for the Uffizi palace.

What makes this seemingly unexceptional sequence important is the incontrovertible dating of the main phases, including the deep and archetypal black earth deposit. However, none of this archaeology merits preserving or presenting to the public. Instead, it will become the first scientific benchmark for a series of new studies about the archaeology of Florence. Nevertheless, Minister Urbani has simply not had the backbone to say he dislikes Isozaki’s ‘bedframe’, so he has invented a far fetched archaeological excuse. Sienna University’s Riccardo Francovich, who has overseen these new excavations, quickly rebutted the minister, accurately explaining when and where it is important to preserve and protect the archaeology. Naturally, the minister declined to comment.

But there is a twist to this story. Whether you like or dislike the Isozaki project, at least it was the winner of an international competition. Yet, just as it has been moth-balled, so in another part of the Uffizi, a huge rebuilding project has commenced, supported by Benetton. No competition was staged to select this design or architect. Instead, a local architect with experience in constructing public buildings, museums, cemeteries and supermarkets was hired. Without any discussion or debate, this infinitely larger project has proceeded, begging many questions of the kind you read about in Michael Dibden’s Aurelio Zen detective stories.

So, to conclude, it is good to report that Florence will soon get the archaeological story it deserves, thanks to intervention by Sienna’s hi-tech team. This high quality research, though, screens a farrago of Florentine intrigue worthy of a Medici prince who now owes his living to globalized tourism. Involving the Japanese architect and his carbuncle, Belusconi’s dissembling minister of culture, the Benetton sponsorship and the mouth-watering prospect of ever-increasing numbers of American, British and Japanese tourists, there is a detective story that the British newspapers missed out on.