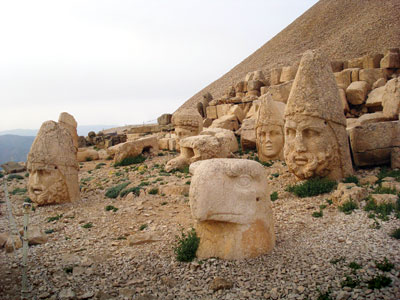 How the mighty have fallen

High on a mountain top in a remote part of south-eastern Turkey, the gods congregate at a place known as Mount Nemrut (Nemrud Daği). It is not easy to reach, but definitely worth the climb. After a long trek up the mountain trail to a height of some 2,100m (6,900ft), you will finally arrive at a huge artificial limestone tumulus about 50m (160ft) high and nearly 150m (500ft) in diameter, built on the natural summit of the mountain. Scattered along the eastern and the western faces at its base are the remains of gigantic limestone statues that once stood 7-10m (20-30ft) high. It has long been believed that there must be something under or within this artificial mound. Could it be the final resting place of a most unusual king, Antiochus I, ruler of Commagene from about 70/69 BC until his death in 36 BC?

In September 2012 a group of archaeologists, using ground-penetrating radar and related techniques, discovered a pyramidal-shaped chamber about 6m long by 2.5m wide and 3m high (20ft × 8ft × 10ft), and about 15m (50ft) beneath the apex of the Nemrut tumulus. Inside this chamber, they identified a box-like object, more than 1.8m (6ft) long, that they speculated could be a sarcophagus, along with as yet indeterminate other objects, possibly statues. Two further chambers have been located near the larger pyramidal chamber. Until permission for the site to be excavated is granted by the Turkish authorities, we can only speculate as to what will be found in these hidden chambers – and whether they belong to the king.

Antiochus I was a complex, enigmatic character. He claimed descent from the Macedonian/Greek conqueror Alexander the Great (reigned 336 to 323 BC) on his mother’s side, and from the Persian King Darius the Great (reigned 522 to 486 BC) on his father’s side. Thus he combined in one person the west and the east, occidental and oriental, elements and culture. Furthermore, he claimed a special relationship with the gods, referring to himself as Theos (divine or god).

During his rule, Commagene was, in effect, a buffer state between territories controlled by the Roman and the Parthian empires. Antiochus I, however, appears to have taken a pragmatic attitude towards his neighbours, siding with generals from both factions of the Roman Civil War, and forming alliances with the Parthians.

Heavenly bodies
The king was not a man who suffered from a lack of confidence. He instituted a royal cult with the clear intention of being worshipped as a god after his death. The extraordinary stone figures found around the base of the mound represent him in the company of four deities: Fortuna Commagene (goddess of good fortune for the kingdom), Zeus-Oromasdes, Apollo-Mithras-Helios, and Heracles/Hercules-Artagnes-Ares/Mars. They once sat on great thrones on two sides of the tumulus, facing out to the east and west, and flanked by huge stone eagles and lions. On the eastern terrace was a huge altar with a base that looks like a truncated step pyramid – giving it its name: the Pyramidal Fire Altar. Around the perimeters of the terraces were pedestals on which carved slabs of green sandstone were erected. These are decorated with reliefs that depict ancestors of the king, who is shown shaking hands with various gods.

In long inscriptions carved on the stone thrones, Antiochus refers to the summit as his hierothesion – or sacred resting place – where his mortal remains were to be interred, and where a cult to him as a god among the gods was to be celebrated as his soul joined those of the other deities in the celestial realm. And the high artificial summit would have been visible from much of the kingdom as a constant reminder to his subjects of their monarch.