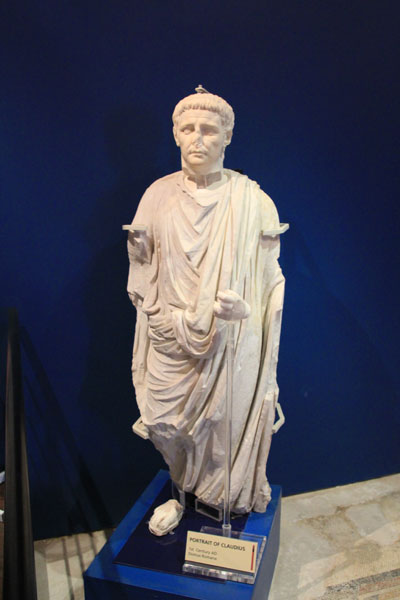 Just outside the fortified walls of Mdina, once the capital of Malta, are the remains of a fine example of a Roman townhouse. The Domus Romana was discovered by accident in 1881 by Dr A A Caruana, a pioneer of Maltese archaeology. But as we approached, the lure of the magnificent fortress city, perched high on the hill, surveying the landscape for miles all around it, proved just too tempting. So, when the taxi dropped us in the car park close to one of the two great gates that lead into Mdina, it suddenly seemed sensible to explore before the sun reached its peak. We set off through the narrow entrance of the Greek’s Gate, named after the small Greek community that occupied this part of the city during the 16th and 17th centuries.

Though Mdina takes its name from the Arabic word medina, meaning ‘walled-city’, the site has enjoyed a long occupation dating back to the Neolithic period. During its Roman phase it was called Melita, from which the island gets its name. But, in 1693 an earthquake razed the city to the ground, and today its architecture is a medley of Medieval and Baroque – of which the Cathedral of the Conversion of St Paul, fronted by a huge square, is a magnificent example. You can still see evidence of Roman masonry, however, incorporated here and there into later buildings.

Narrow lanes twist and turn throughout the city, designed to provide shade in the fierce summer heat, and to deter hostile intruders: not wide enough to allow attackers to effectively draw a sword, and with frequent angles to make it easier to lose anyone in pursuit. At the far corner of Bastion Square we stopped to admire the stunning panoramic views, sipping chilled Kinnies – a local soft drink with an unusual, though not unpleasant, taste.

When the Knights of St John were given the island, Mdina became the Città Notabile – or Noble City. However, within a few years of the Great Siege of 1565, when the Turks under Suleiman the Great wrought havoc on the island, they decamped to their newly built fortress harbour at Valetta, and Mdina became Città Notabile – the Old City. Today, a mere 300 or so people still live here. No cars are allowed, other than those belonging to residents, and the only jam we saw was a good-natured encounter between two horses with carriages coming in opposite directions down a narrow street. All the horses wear rubber shoes, and even the wheels of their carriages are sheathed in rubber – earning Mdina yet another nickname: the Silent City.

We left via the Main Gate, a triumphal arch built by the Grand Master de Vilhena in the early 18th century, and made our way to the 20th-century Neoclassical temple-style entrance of the museum, built over part of the remains of the Domus Romana – our original destination, and one of the most prestigious Roman buildings on Malta. Although Dr A A Caruana discovered the townhouse, it was another of the great names in Maltese archaeology and the island’s first Director of Museums, Sir Themistocles Zammit, who began thorough excavation in 1922.

A set of extremely fine statues portraying Emperor Claudius and members of his family found here have placed this house in the 1st century BC-AD 1st century. However, a friend, who knows rather more about this than me, suggested that the peristyle layout is more typical of the 2nd or 3rd centuries AD. The museum follows the design of the original house, with its incredible mosaics displayed in the reconstructed spaces for which they were designed. The richly decorated courtyard contains an extremely fine polychrome mosaic depicting two doves on the rim of a bowl. As well as the statues, the exhibits in this elegant setting include several examples of high-status artefacts, like a fine glass rhyton, many from the site itself, but also from some of the many Roman sites dotted across Malta. Outside, stretching to the west, are the tantalising remains of several out-buildings and other structures that were excavated by Zammit but, sadly, not accessible to the visitor today.

Famous visitor
Perhaps Malta’s most famous Roman visitor was St Paul, the peripatetic apostle, who was shipwrecked here in AD 60, en route from Caesarea to stand trial in Rome. Opinions that the prevailing sea currents and wind direction on such a voyage would have sent the boat in another direction, are countered by the Maltese, who cite Paul’s travelling companion and fellow apostle Luke: he describes a small island called Melite – just a consonant away from the Roman name Melita. Churches and shrines to St Paul are prevalent across the island, and a bay is named after him. Four anchors found by fishermen in the 1960s were dated recently to the 1st century AD, further exciting supporters of the shipwreck theory.