In the land of the minotaur 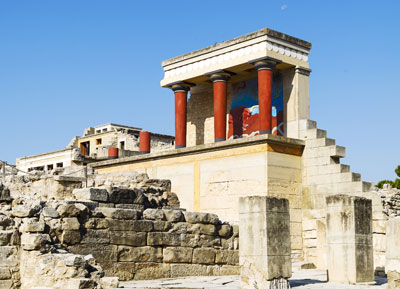 Early summer, before the start of the school holidays, is the ideal time to visit Knossos: the weather is perfect but, more importantly, there are few cruise ships basking in the harbour at Heraklion, and few holiday-makers to crowd the view. So I found myself wandering the spectacular ruins of this great – in size, style, and importance – site in almost solitary splendour.

The remains of the many buildings surrounding the Great Court obscure its huge scale, and only by standing in the centre is it possible to fully appreciate its enormous size. It was excavated at the very dawn of the 20th century by Arthur Evans, whose reconstructions included the use of reinforced concrete and what some would consider rather bizarre frescoes. Certainly, the Art Nouveau elements – enthusiastically painted by the Swiss father and son team who shared the name Emile Gilliéron – seem rather more Edwardian than Minoan in style. However, they do give the general visitor or, like me, very amateur archaeologist at least a sense of how this site may have appeared in its heyday. And while frowned upon now, it is important to remember that at the time Evans was excavating, the use of concrete to replace ancient rotted timber beams was a new and exciting method of reconstruction.

It is hard not to be impressed by the skill of the Minoan stonemasons. If you head east from the entrance, and climb down below the ruins, you can look up and examine the main supporting wall of the site as it slopes down into the valley. The enormous cut stones that make up the wall fit tightly together, running along the entire length of the site.

As I wandered further I came across the staircase restored by Arthur Evans. Here, you can look down four flights of stairs into a stairwell to see an architectural structure that seems almost completely modern in its design.

Knossos is the largest of the palaces so far discovered on Crete that belong to the Minoans – the civilisation so named after the legendary minotaur to whom seven youths and seven maidens sent from Athens were annually sacrificed. It is the finest and most extensive of these palaces, and suggests this was a kingdom of considerable wealth, possibly based on its maritime power, and that it exacted tribute from Athens – possibly represented by the youths and maidens mentioned in the ancient legend.

The Great Courtyard is surrounded by a maze of small rooms connected by corridors and grand staircases ending suddenly in unlit vestibules – the ‘labyrinth’, perhaps? Long, narrow lines of storerooms once contained ceramic storage jars, or pithoi, some  of which remain, evidence not only of the king’s wealth but also of the role the palace played in controlling the distribution of food resources.

On the edge of the site, just across the road, is the Villa Ariadne. It was built by Evans as his base, and originally called Palazzo Evans. It is not open to the public, but I was keen to see it. For me, it is full of romance: several of the young archaeologists who worked there before the war later operated behind the German lines – indeed, the curator of the site, John Pendlebury, was shot dead in 1941 by German soldiers during one such mission; and in 1944, they were involved in the capture of the Nazi Commander General Kreipe.

I had been advised not to miss the museum in Heraklion, with promises that it is ‘a wonder’. So I was disappointed to discover on my arrival that it had been reduced to just one middle-sized room – albeit crammed with very interesting artefacts – while the rest of the museum was closed for improvements. According to a brass plaque, it has been closed since 2006, but there is no date for reopening, and, more importantly, no sign of any work being done. This is a shame, as its collection of Minoan artefacts is world famous. I consoled myself with a walk around Heraklion, admiring its fine Venetian buildings, including the beautiful Morosini Fountain with its four lions gushing water from their mouths, and the fortress that dominates the harbour.

About 30km (19 miles) east of Knossos is the much smaller Minoan palace at Malia, set in open country next to the sea, and a much quieter place to visit. Like Knossos, it was destroyed by an earthquake during the Late Bronze Age. It was rebuilt in the later part of the Late Bronze Age, and the ruins today are the remains of this second phase. On one part of the site, the gypsum of a recently excavated short flight of steps, now under cover, is as bright and fresh as if newly cut.

By far the most interesting site for me was Gournia, a small Minoan town on a hilltop south of Agio Nikolaos. It is known as the Cretan Pompeii: the walls of the buildings stand up to 2m (6ft 6in) high, and between the terraces of houses are narrow paved lanes that run to the top of the hill to the remains of what some believe is a small palace, with its equally small court alongside it. The superb location of the town, looking out to sea, must have been chosen for its commanding view of the bay, and from here it once controlled the traffic of goods across the isthmus to and from the south coast.