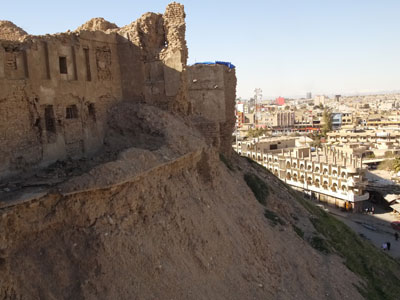 Today, you will only get a view of Erbil Citadel ‘some four miles away’ from the window of a plane: there is a building boom going on in the modern city that surrounds the ancient settlement. Even so, the sight of the great citadel cannot fail to impress. It sits on top of a 32m-high (105ft) tell that rises steeply from the flat plain and dominates the urban sprawl below, its 11ha (27 acres) securely wrapped within a solid wall of Ottoman period houses.

Erbil – also Arbil, Irbil, or, in Kurdish, HawlÍr – is the capital of Iraqi Kurdistan. It is the fourth-largest city in Iraq, and getting larger every day. But I am here to visit the ancient citadel that sits gently decrepit atop the tell in the midst of the 21st-century bustle.

The citadel is a rare example in this part of the world of a fortified urban settlement, designed for civilian occupation rather than as a military structure. While little remains of these defences, historical records from the Middle Ages describe an encircling contiguous defensive wall with towers and gates, and, at the base of the tell, a moat. In about 1960 the southern gate – the earliest and, at one point, the only means of access in and out of the city – was demolished and replaced.

However, Erbil’s unique quality is that it is the oldest continuously inhabited urban site in the world, with evidence of unbroken occupation dating back about 7,000 years. David Michelmore, Adviser for Conservation and Revitalisation for the High Commission for Erbil Citadel Revitalisation (HCECR), who introduced me to many of this fascinating city’s finest sights, believes that its earliest levels may be older still.

Since 2007, HCECR has been working in the citadel to preserve and conserve the existing 330 buildings, some of which are in a precariously dilapidated state – 90% of the buildings are now derelict. Between 1930 and 1974, all but one of the residents left, leaving the city empty for nearly two decades. The years of neglect have taken their toll. These houses require constant maintenance: their flat roofs are covered with a soil and straw mix, which must be rolled with a large round stone after every rainfall to maintain a watertight seal – a Herculean task for the HCECR today.

The Mufti of the Great Mosque, Uthman Rashad Mufti, who is the 17th generation Mufti of the Great Mosque embodying 500 years of serving the community, remembered the rainy nights of his childhood when he lived in one of those houses: ‘When it rained, we heard a ping and put a bucket there; then, half an hour later, we would hear it in another place, and put another bucket there; after four hours we had a symphony. Then we would have to roll the roof. Every home did this. In the autumn everyone mixed soil and straw together and laid it on the roof. After five or six years, half was taken out and renewed.’

Timeless charm
At first glance, the citadel appears dusty and disappointing, its walls crumbling, its buildings desolate. But in the late afternoon’s soft light, when the bricks glow golden-brown, the real beauty of the site is revealed in the honeycomb and herring-bone brick patterns.

The citadel is divided into three districts or mahallas: the Serai, which was occupied by the wealthier families; the Takya, an area of Sufi and dervish houses; and the Topkhana, which was occupied by artisans and farmers. Wandering through the narrow tangle of ancient streets that branch, tree-like, from the Main Gate on the southern side, the traveller is led through donkey-width alleyways and into courtyards.

‘Erbil is the only place in the world that can give you an idea of what it might have been like to walk in the streets 4,000 years ago,’ says Michelmore. The houses have been replaced and rebuilt over the centuries, but the alleyways and accesses appear largely unchanged in layout and character. Indeed, the German explorer Carsten Neibuhr’s description of the citadel in 1766 is recognisable to the 21st-century visitor: ‘Today there is not much left other than this castle, and this is not even surrounded by a wall anymore, but the outer houses, which are all constructed by unburnt bricks, stand so near to each other on the border of the hill that today one can only reach the city by a staircase.’