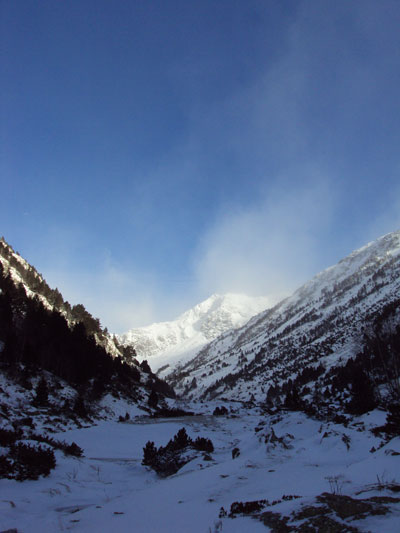 Andorra is best known as an inexpensive ski-resort, but the tiny landlocked principality is chock-full of archaeology, its rich cultural heritage waiting to be explored. Just 450km² in area, Andorra nestles in the heart of the Pyrenees, bordered by the Languedoc region of France and Spanish Catalunya. So why, given this prime location, has it slipped under most people’s archaeological radar?

Excavations have revealed a wealth of prehistoric artefacts: the rock shelter La Balma de la Margineda, excavated 1979-1991, revealed evidence of multi-period occupation from the Mesolithic and Neolithic periods right through to the historic era. Bronze Age brooches, arrow heads, bracelets, Iron Age Iberian type coins, and early burials are found throughout Andorra. The Neolithic cists of La Feixa del Moro at Juberri, near the southern border, have produced a series of finely polished axeheads, ceramics, bracelets carved from varascite mined at Gava (Catalunya), and a host of lithics – all equal in quality to any in the Pyrenean region and soon, hopefully, to be displayed as part of a national collection in a new museum setting.

Then there are the rock carvings. Most are found along Andorra’s two principal valleys, and date to the Medieval period – though many are earlier, including Neolithic. Visitors to the little village of Sornas, near Ordino, for example, are rewarded with a series of anthropomorphised crosses, while perhaps the most curious carvings are cryptographic graffiti at St Cerni de Nagol, near Sant Julia in the south of Andorra. For my money, the most interesting carving is near Canillo at El Roc de les Bruixes (The Rock of the Witches): among the inscribed crosses and human figures are pentagrams and the vestiges of carved script.

And there is more: the attractive Romanesque churches serving communities across the mountains and valleys of Andorra form one of the densest surviving clusters of Romanesque ecclesiastical architecture. As the Gothic style failed to take root in Andorra, the Romanesque tradition enjoyed greater longevity here, and today about 40 churches span several centuries of stylistic evolution.

Possibly the most cherished is Our Lady of Meritxell, dedicated to the patron saint of Andorra. According to local legend, a wild rose, in bloom out of season, was found growing out from under a statue of the Virgin and Child at this spot in the late 12th century. Each time the statue was moved, it found its way back to the wild rose. So a chapel was built on the spot to accommodate the miraculous statue, which became the focus of a pilgrimage each September. Regrettably, in 1972, the original Romanesque chapel burned to the ground and the statue was destroyed; today a distinctly modern, yet still attractive, church stands on its footprint.

Also worth visiting are the 11th-century Sant Joan de Caselles in Canillo, with its Lombard-style belltower and murals, and the 12th-century Sant Miquel d’Engolasters, with its 17m belltower sporting, unusually, a carved human face on one of the uppermost sides. A personal favourite is tiny Sant Rom‡ de les Bons in Encamp, a 12th-century church with stunning interior wall paintings that depict the apocalyptic visions of St John; beside it lie the remains of a 13th-century defence tower, the only one in the principality.

Before you leave, for an insight into Andorra’s everyday past, visit three 17th-century houses that are now museums: Casa d’Areny-Plandolit, Casa Rull, and the Casa Cristo ethnographic museum.

Madriu-Perafita-Claror valley
The Madriu-Perafita-Claror valley is described by UNESCO as a ‘microcosmic perspective of the way people have harvested the resources of the high Pyrenees over millennia. Archaeological evidence of Medieval summer settlement, field terracing, and iron smelting have been uncovered. The remains of shepherd’s huts, sheep pens, dry-stone walls and charcoal-making sites are still visible in the valley floor and woodland.’