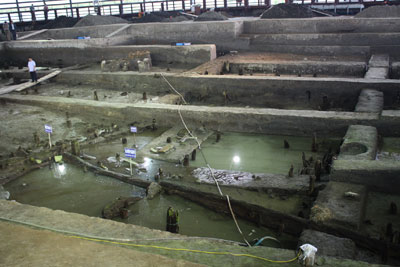 For anyone interested in the Neolithic Revolution, Hemudu in China is an iconic site. In the early 1970s, I was deeply involved in what Kent Flannery had called the 64,000-dollar question of Asian Prehistory – the origins of rice cultivation.
I spent Christmas Day 1972 in the remote hills of Northern Thailand, digging with Chet Gorman at Banyan Valley Cave. We were finding rice grains and potsherds in a Hoabinhian cavern, and were hopeful that we were finding a site where rice was being brought into cultivation. However, when the radiocarbon and TL dates were returned, we found the relevant layers were far too late, and, to add to our disappointment, the rice turned out to be wild. Then news began to filter through the mists of the Cultural Revolution of an extraordinary find at Hemudu, just south of the Yangtze Delta. Deep in waterlogged ground, wooden house foundations were being uncovered, associated with thick deposits of rice. The initial radio- carbon dates placed the occupation c.7,000 years ago.

This discovery transformed our models for early rice domestication, and for the outward spread of Neolithic rice-farming communities. So, when recently I was invited to attend a symposium on Hemudu and present a paper on the expansion of rice farmers from the Yangtze Valley into South East Asia, I accepted without hesitation. Everything in China is on a vast scale for one accustomed to the quiet life in southern New Zealand, and my Chinese hosts certainly know how to make one welcome. Met at Shanghai Airport, I was soon being whisked south to Yuyai, a journey that took us over the Hangzhou Estuary Bridge. I must confess that I had never heard of this structure, so I was taken aback when it seemed to go on for ever. Indeed, it turned out to be an engineering marvel, once the longest sea bridge in the world – fully 35km long – only to be exceeded recently by another Chinese bridge. Our hotel in Yuyai was luxurious and welcoming. On the evening of our arrival, we attended a welcome banquet of about 2,000  guests to celebrate the International Symposium on Hemudu in global perspective, followed by a two-hour concert in which much of the music and many of the dances celebrated the Neolithic site. Where else in the world could you find such an event?

The papers given over two days were an interesting mixture of the results of new research and reflections on the initial excavations of Hemudu by those who participated. One of the most important advances made over the past few years, in a research initiative led by Dorian Fuller of the Institute of Archaeology, is the detailed analysis of the rice remains that survive in abundance in the wet conditions of Hemudu and related sites. The results are indicating that rice was for millennia just one component of a very varied diet that included acorns, water chestnuts, and other aquatic plants, not to mention fish and deer. Indeed, reliance on rice cultivated in permanent fields only became established in the 3rd millennium BC.

Having been brought up to date not only with Hemudu, but also the nearby and related site of Tianluoshan, we were taken out to visit both. Although Hemudu is dominated by a fine new museum, in which many of the finds are exhibited, the visit to Tianluoshan proved the highlight. The land here is flat, rising only a few metres above sea level, but backed by rising hills. Rice fields dominate to this day, and the first sight of Tianluoshan is a giant dome, placed over the prehistoric site. Within, there is a viewing platform, from which one can look down on a wooden footbridge that crosses overran old river bed, flanked by palisade posts. A heap of wooden paddles had been found there. The site is still being excavated, and we were allowed to descend and walk along the baulks to examine at close quarters the wooden house foundations, within which were thick layers of acorns. The whole scene took me back 45 years to my PhD research on the Swiss Lake Villages; for here is virtually a carbon copy.

Outside the confines of the dome, we visited a satellite excavation, where a prehistoric rice field had been uncovered. From there, we walked over to the archaeological base building, where the finds were being processed. There were crates of tiny fish bones, rice, acorns, and a remarkable array of artefacts – including spades made from cattle shoulder blades, needles, spindle whorls, decorated bone hairpins, pottery vessels, stone adzes, and bone weaving shuttles. Peter Bellwood and I have been involved in excavating Neolithic sites in Vietnam and Thailand respectively. Here at Tianluoshan, we were both struck by the similarities between this material and our own. Tianluoshan was in its heyday about 5000 BC, and it took three millennia or so for rice farmers to spread south into the hot, monsoon lands of South East Asia. I left envious of the resources at the disposal of my Chinese colleagues, and filled with admiration at their professional dedication as they continue to illuminate the Hemudu phenomenon.